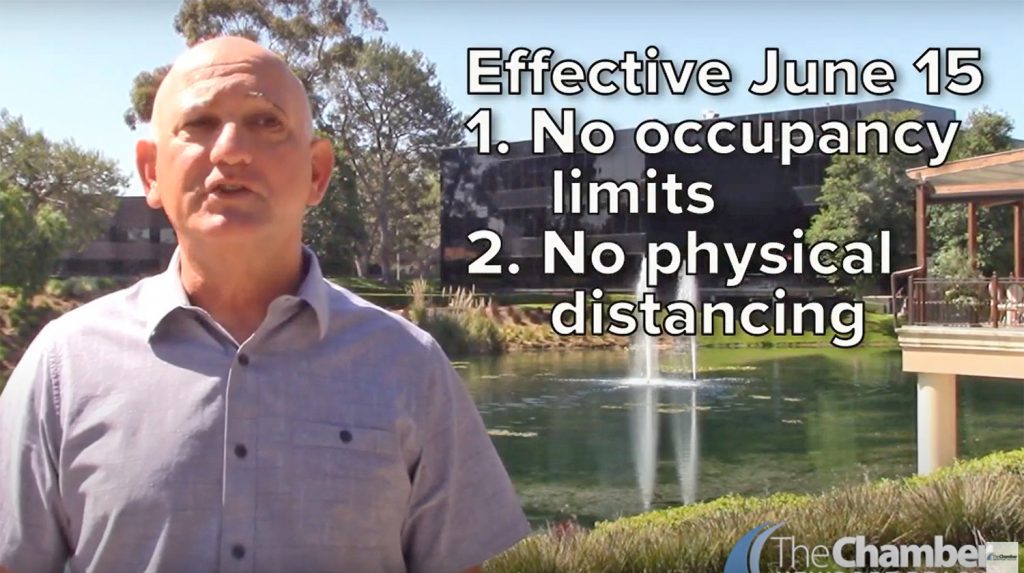 On Monday, May 24, Newport Beach Chamber of Commerce President and CEO Steve Rosansky released a video sent to Chamber members and other businesses and community members to announce that the California Department of Public Health has released the much-anticipated guidance that will replace the state’s Blueprint for a Safer Economy when the state opens up on June 15.

This video comes less than a week after a separate video announcement from Rosansky on May 18 about Orange County being allowed to move to the less restrictive Yellow Tier.

“Starting June 15, all capacity and physical distancing restrictions will cease to exist for customers, attendees and guests, and businesses may return  to normal operations except for mega events, which are defined as more than 5,000 people indoors and 10,000 people outdoors,” said Rosansky in the May 24 video.

“As of June 15, masking requirements will also be aligned with the new CDC guidelines that allow fully vaccinated people to go maskless in most situations,” continued Rosansky, adding that “Employers will still be required to follow Cal/OSHA guidelines in workplaces to the extent that they apply to their employees.”

Rosansky explained that most businesses will be allowed to open with no occupancy limits. Physical distancing requirements that have caused long lines and a six-foot separation of tables at restaurants will no longer be required. However, noted Rosansky, individual businesses may elect to keep some restrictions in place as they see fit for their establishment.

“Other operating guidance will also end, which should make it easier for businesses to run more efficiently and profitably,” said Rosansky. “The only thing holding back many businesses will be their ability to hire enough employees to service the anticipated demand, especially in the restaurant and hospitality sectors.”

With regard to masks, Rosansky explained that “unvaccinated individuals will be on the honor system when it comes to masking in public. However, at their discretion, some businesses may decide to retain indoor masking requirements for their customers. You can get all the details by visiting the state website at www.covid19.ca.gov.”

The only area of major uncertainty, said Rosansky, is the requirement that employers still follow Cal/OSHA guidelines. The Cal/OSHA board met last week to vote on updated guidelines but ultimately voted to put off the decision until a special meeting of the board on June 3.

“This was done at the request of Cal/OSHA staff members, who asked to have more time to develop updated standards  based on the new CDC and California Department of Health guidelines,” said Rosansky. “We’ll have to wait and see if the Cal/OSHA board sides with employer advocates such as the California Chamber of Commerce and the California Restaurant Association to approve less stringent standards, or labor advocates that are pushing for the retention of mask wearing and other safety measures in the workplace.”

In his May 18 video announcement, Rosansky said that Orange County had moved into the state’s less restrictive Yellow Tier in California’s Blueprint for a Safer Economy.

“This is the first time that Orange County has been in the Yellow Tier since Gov. Newsom unveiled the Blueprint for a Safer Economy on August 28 last year,” said Rosansky, who admitted that for some businesses, the transition to the Yellow Tier will not mean much as they are already fully operational. But Rosansky noted that for others, including amusement parks, bars, bowling alleys, breweries, gyms, fairs, movie theaters, and professional sporting venues, moving to the Yellow Tier will allow for increased occupancies and/or reduction in operating restrictions.

Rosansky added that June 15 is also the date that California will implement the new CDC mask guidelines, ending California’s indoor mask mandates—at least for those who have been fully vaccinated.

“Despite what you may have heard, chain stores like Costco, Walmart and Trader Joe’s that have announced they are dropping indoor mask wearing policies based on the latest CDC recommendations are still subject to California’s mask wearing requirements,” stated Rosansky. “So don’t be surprised if you’re asked to put one on if you try and enter a business without one.”

Rosansky ended the video by telling viewers to “wear your mask until June 15, get vaccinated, and be safe.”