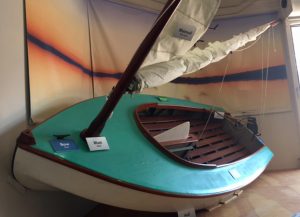 To the non-Morse code adept, that spells WOW!

Morse Code was once the only means of wireless communications between ships at sea and ships to shore. Inarguably, the most famous of those transmissions was SOS – the internationally recognized letters for “HELLLLP!!!!”

According to Susan Smith, Education Manger at Discovery Cube’s Ocean Quest education-and-entertainment center at the Balboa Fun Zone, “’WOW!’ is the most common expression heard from kids (of all ages)” when visiting the new Science of Sailing exhibit, especially when they get to pet the crabs that Smith hauls out of the ocean up to the Balboa Pier during one of her marine lectures.

Of the many nautical experiences awaiting visitors, the interactive Morse code telegraphy station is their first one they encounter. Some of the sailors-to-be are so young, they can’t yet spell SOS, but they certainly love the fun aspects of this early communications brought to life by 21st century video technology. 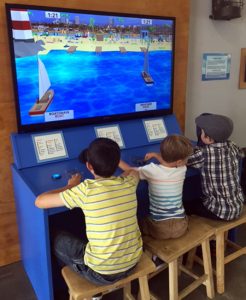 The evolution — and evolved complexity — of sailing is revealed by the numerous ship models reflecting everything from early outriggers to the most complex sailing ships ever built, ships that required (in some cases) hundreds of hardened men to handle line and sails just to get these behemoths to move across the world’s seas in trade and battle.

Then, at the front door, frozen in a heeled-over pose, is the elegant 12-foot-long sloop Snowbird, a simple, single-mast boat designed and built in 1921, for the home-build market to teach children the art of sailing.

As a racing class, Snowbirds became very popular in Newport Beach, and were the genesis of the “Flight of the Snowbirds” regatta from the ‘30s through the ‘60s.

This is a participatory exhibit, with everything from model boat building and boat racing exercises to knot-tying instruction, from flag-raising races to nautical signal flag design. 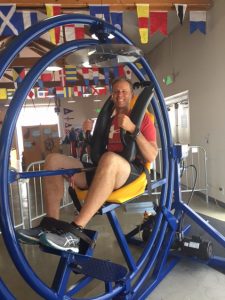 One experience ranks high on the wild side: a sit-inside gyroscopic machine that is guaranteed to test the intestinal fortitude of those who wish to feel the effects of wild weather on ship and stomach, or while in an inverted kayak in bumpy water.

U.S. astronauts in training undergo this fortitude test while secured inside this contraption.

After his brief ride, but while still waiting to be unstrapped, 52-year-old Michael Wesseln, a financial planner from San Diego, calmly declared it to be a great experience.

“I was not at all disoriented, which was shocking, because I had no idea which way it was going,” he said.

His 10-year-old son, Colin, said with a mature evaluation, “I normally don’t like these kind of rides; but it changed my experience, so I enjoyed it.”

Outside the exhibit hall, Newport Beach 5th grader Cullen Keefe was still evaluating the topsy-turvy ride as he contemplated the reaction to his still settling stomach and inner ears. When asked if he enjoyed the disorientation, he replied in double meaning, “I think it was fun. Maybe I’ll join the Navy when I grow up.”

Other exhibits include signal flag recognition/instruction, a neye-hand coordination device that demos the skill needed for single-handed sailing, a physics exhibit showing the natural dynamics of wind and sea, and “iconic and historic artifacts,” such as South Pacific islanders’ navigational stick charts that reveal everything from celestial bodies to sea swells.

An afternoon at the Ocean Quest is an exploration unto itself. “The Science of Sailing” runs through Labor Day.