“When one door closes, another one opens.”

Restaurateur and chef Cathy Pavlos of Lucca Restaurant in Irvine is turning Sage into Provenance, while the culinary wizards at The Winery Restaurant in Tustin are turning Villa Nova into another Winery. Both restaurants are expected to open this fall.

Chef Pavlos, a longtime resident of Corona del Mar, invited us to Lucca to sample some of the dishes that will be on the Provenance menu, and to tell us her plans for the new location. 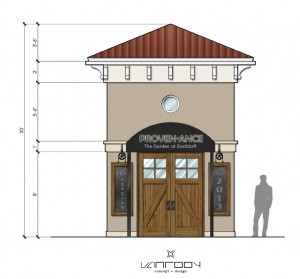 “Provenance will have similar attributes to Lucca, but will be more introverted,” Pavlos told us. “There’s a courtyard in the back that overlooks the garden. We’ll have a 1,300 square foot raised bed organic garden, and around the garden is a vertical green wall. The patio dining is very private and quiet, but you can watch the chefs harvest vegetables and herbs and prep them before taking them to the kitchen.”

“We’ll have a larger kitchen than we have at Lucca, and will be putting a VIP table in the middle of the kitchen that seats eight. We’ll also have a different style of cooking, and we’ll have bar chefs. Whatever time of year, we have a signature drink, so we could pick our berries and mint, muddle them at the bar, strain it, and add vodka. Can’t get much fresher than that.”

Chef Pavlos describes her menu as Napa-esque, which made Napa native Catherine happy to hear, especially after sampling the cuisine.

We both loved the quinoa, served risotto style, which Catherine dubbed “slightly creamy and bursting with flavor, with 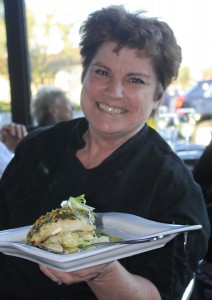 Catherine also tried a Lucca special: wild tuna pappardelle pasta. “The pasta had a cilantro-macadamia nut pesto accompanied by cannellini beans, buttered breadcrumbs and lemon zest. I loved how the dish combined a few simple ingredients to create something with a nice rich flavor.”

For more info on Chef Cathy and her restaurants, visit LuccaCafe.com.

I caught up with The Winery co-owner JC Clow on Tuesday, minutes after he had signed the final paperwork and taken custody of the keys to Villa Nova.

“The excitement surrounding all of this has exceeded our expectations as far as feedback from the public–it’s been overwhelming,” said Clow excitedly.

He told me that he and his business partners purchased Villa Nova at an auction in February, where they were the highest of eight bidders. He signed a 15 year lease on April 1, and hopes to open by mid November after major renovations.

“We’re redesigning the restaurant, almost down to the slab and studs,” said Clow. “We have 9,400 square feet on the water with stunning views. It’s a dream come true. Our team is very excited.”

Especially Chef Yvon Goetz, who lives in Newport and won’t have far to drive to work. Clow said that Goetz  is designing a menu similar to what The Winery currently serves.

“We might have a bit more seafood, but it makes sense to continue to build on what made us successful,” notes Clow.

For more information on The Winery, visit TheWineryRestaurant.net.