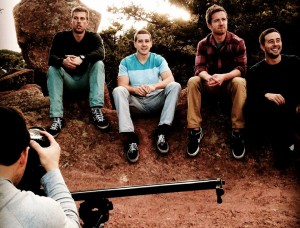 “We hope people see the documentary and leave feeling inspired to be God’s hands and feet,” explained Doug Wekenman, one of the four men featured in the documentary “The AC Project: To The Ends Of The Earth.”

“We hope people come away feeling an invitation to be part of the bigger story that God is writing.”

“The AC Project” is an inspiring documentary chronicling the one-year journey four young men undertook in 2012. The four friends from college decided there must be more in life than just pursuing the American dream. Doug said they wanted to see what Jesus meant when He told His friends to go to the ends of the earth with His love. The adventuresome group wanted to help in whatever way they could, while spreading the message of God’s love and hope in the process.

“Before this past year I remember lying awake, wondering how a twenty year old guy could feel completely empty and alone at the height of so-called life,” Ethan Matott explained at the beginning of the film. “I had run after things culture told me to fill up on: parties, booze, sex, and money, but the thought kept pounding in my head that there has got to be more. Then I read some of the Bible for myself and heard the offer of a full life. It seemed too simple—go love people in the world and share the full life God offers with all who want it. Out of a desperation to become someone actually living, I decided to look beyond classrooms, fleeting fun and future cubicles. Instead, I would go.”

“Ethan and I talked and decided to go on a trip where we could help and serve people, do mission work and document it to capture the stories and share them with others,” Doug said. “We just didn’t know how it was going to come out.”

Next they asked Doug’s younger brother Ryan and their friend Matt Fons.

“This trip was something I was ready for, right away,” Ryan said.

“It was completely unexpected, but it was something that, as soon as I heard about it, I wanted to do it,” Matt said.

The four called themselves “The Acts Commission.” Doug said that the book of Acts is their favorite book because it’s about ordinary men doing their best to follow Jesus. They talked, prayed and planned for a year, giving each one time to graduate from college. They busied themselves contacting organizations and ministries around the world to see which ones they could help, as well as raising support for their travels.

“The responses were really cool and exciting,” Doug said. “We got out a world map and looked at all the different countries and decided we would travel around the world west, in a sort of order. We went to Haiti, the Dominican Republic, Belize, Fiji, Australia, India, Uganda Burundi, Zambia, and South Africa.

Some of the ways the team helped included giving clean water in Fiji, building an orphanage in Belize, and helping sex trafficking victims in India.

“Whether it’s across the ocean or across the street, everybody can be used by God,” Doug said. “It could be in your job or in your neighborhood; we all have something to offer.”

“The AC Project: To The Ends Of The Earth” screens on Sunday, April 26 at 2:30 p.m. at The Triangle. Visit NewportBeachFilmFest.com for details.