Though the churches differ in style, size and structure, the evening was one of unity, evidenced the minute all the voices joined together for the hymn “How Great Thou Art.”

“We’re singing these words not as a song but as a creed that unifies us,” explained Todd Proctor, one of The Stirring’s founders.  “We are one church under God. We’ve been so excited to see how many different churches wanted to be part of this. God is pleased tonight with who is on the stage and who is in the seats.”

“’The Stirring’ is a night to gather local churches and unify around the idea of worship, which is seeking God and responding to God together,” Proctor said. “We were so excited to have Father Kerry from Our Lady Queen of Angels lead us in an ancient prayer of unity. There just couldn’t be a better way to declare the theme and the call of the night. There was a sense among everybody that these are all our brothers and sisters around the room, and where there have been differences in the past, we have to fight to come together.”

“Afterwards we heard such gratitude from people who appreciated the opportunity to worship with people they wouldn’t have otherwise, such as those from a Catholic church 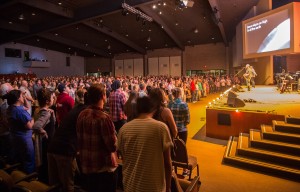 worshipping with a mainline evangelical church, or those from large churches singing next to those from a small grassroots church,” Proctor continued. “Many extremes of churches were brought together under one banner of worshipping God. There are many questions about church today and what is Biblical, but there is one thing that is unquestioned in the Bible, and that is that God wants His Church unified. Unity is non-negotiable Biblically.”

Mariners hosted the third Stirring this year. The first was in North Orange County with close to 2,000 people and the second in South Orange County had about 800. Including ther Mariners event, over 4,000 people came together in united worship.

“At the time I was leading Rock Harbor and many of us realized that music in the church can become a huge battleground of preferences, such as modern or traditional, and we saw the opportunity to pull churches together around worship. We named it The Stirring with anticipation of how we believed God was moving to unify His Church. Our first one was far more chaotic than we expected, but also much more powerful. We did five Stirrings in the first run, but then there was a sense that that time had come to an end.”

“After a decade off, we sensed it was time to start again. Many leaders share the same passion to see unity in the church through worship,” Todd said. “We had a conviction to do three in different parts of the county. We don’t have a grand plan in place for the future but we’re meeting this month to pray and plan for the fall and possibly do more events in Orange County. We’ve also had requests from churches in cities beyond Orange County request for help to do Stirrings as well.”