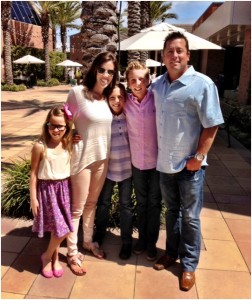 “When we rushed upstairs to get the kids out, our master bedroom ceiling was bubbling,” Newport resident Shawni Jackson said. “The fire was about to break through, but it hadn’t yet. God really watched out for us.”

Shawni recalled her family’s experiences when their house caught fire, and how they felt God’s care shown through neighbors, and total strangers.

“It started like a normal Sunday,” she said. “We’d gone to church, where our son Tucker was given his own Bible with his name and the date was engraved in it. It was March 17, St. Patrick’s Day. The house we rented in the Port Streets was older, and if the heater was on, it got too hot upstairs, so instead we made fires in the fireplace to warm the downstairs.”

“About 9:15 we got a knock on the door,” she continued. “When Bill answered, a woman who’d been walking her dog said, ‘Your house is on fire.’ Bill went outside and didn’t come back, so I went and asked if she was sure. ‘Yes!’ she answered. ‘Your house is on fire, get everybody out!’ We grabbed the kids.”

Shawni went to the neighbor’s house, where she saw six to eight foot flames coming off the back of the roof. Her neighbor Karen Barber called 911.

“You don’t think about anything but your family,” she said. “All I grabbed were some coats on my way out. There was a policeman 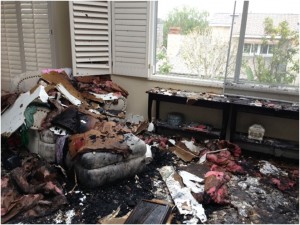 in our front yard who’d been patrolling the neighborhood, and he wouldn’t let us go back in, so all we had was the kids, coats and ourselves. The firemen were there in less than 5 minutes. We sat outside across the street; we probably had 100 neighbors checking on us, making sure we were ok.”

Shawni and Bill have three children: Ella is 8, Tucker 9 and Tate is 12.

“It was scary because I didn’t know what was going to happen,” Ella said. “But then I realized we still had each other, and it was going to be ok.”

“We’ve been overwhelmed by the incredible outpouring of love and help from the community, starting that night when we had so many offers of places to stay,” Shawni said. “We finally went to our friends, the Schafers, in the neighborhood at 2:30 in the morning.”

“The next day was even more powerful,” she continued. “The city gave us two hours to get things out. Karen wrote it on the neighborhood website and within 30 minutes we had 50 people with Suburbans moving us into a house that the Allens owned, and were going to make available for rent the next day. God saved it for us, and Scott rented it to us at first on just a handshake; he didn’t even know us. Neighbors donated mattresses, bedding and more, and when the kids came home from school, we were moved in.”

“There have only been 3 times in my life when I’ve experienced Divine intervention, and this was one of them,” Bill said.

The Jacksons still don’t know who the woman was who walked her dog at the perfect time to see the fire and alert them. Neighbors didn’t recognize her and nobody saw her again. Some wonder if she was an angel.

“If it had been one or two minutes later, the whole interior would have been smoke filled and it would have been so much harder to get the kids out of three different bedrooms,” Shawni said. “God had His hand in it. It’s also amazing that our master bedroom was pretty much destroyed, all except for a cross hanging on the wall. The cross was the only thing that made it out untouched, unscratched, and in perfect condition.”