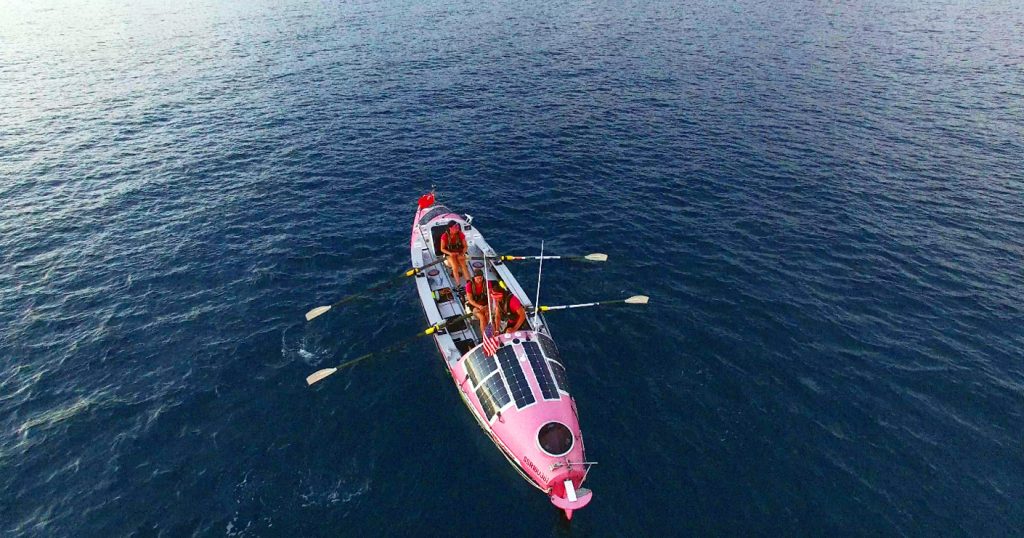 There was absolutely no way that four girls weren’t going to set a world record. After all, they were the first humans to row across the entire Pacific Ocean – from San Francisco, to Cairns, Australia.

Their incredible odyssey spanning 8,579 miles over nine months is humanly and dramatically featured in the 90-minute documentary “Losing Sight of Shore.”

“Losing Sight of Shore” reminds us that we should not lose sight of the incredible challenges that still exist in our world of comfortable and softening lifestyles – should one (or four) choose to seek the unusual.

The film is produced by Emmy Award-winning documentary filmmaker and TV producer Sarah Moshman, who in 2012 “tired of the way media portray women” and pursued her dream of making a film that celebrated strong women.  She couldn’t have found four more exemplary subjects. 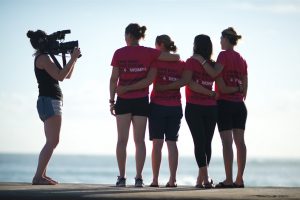 The film’s opening title pretty well sums up the tenor of the film: “You can never cross the ocean until you have the courage to lose sight of the shore.”

The physical preparation alone to undertake such a prodigious challenge would dissuade most anyone from what many considered an impossible goal.

Their robust, one-ton rowboat, measuring only 29-feet in length, and displacing one-ton in weight, truly showed how miniscule it was for such an adventure, when passed within hailing distance by a massive Matson container vessel, whose captain warned the girls over the radio of “heavy weather coming up; you’ll feel it!”

High up aerial footage, obviously from a stabilized drone, show the rowboat to be but an inconsequential twig in an incomprehensible blue vastness. 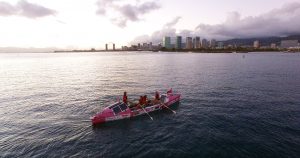 Being out at sea for such long spans of time and miles, one can rightly expect to experience everything that the sea gods will order, and order they did: table flat seas one day, mountainous swells with cascading and crushing crests the next; happy, following swells brought alive by soaring seabirds and cavorting dolphins, to confused conditions agitated by opposing currents and winds.

Then there was the strength-sapping heat and humidity that conspired for weeks to totally enervate the crew. Strong legs and arms working 24/7, two hours on, two off, couldn’t guarantee the girls could overcome nature’s conflicting choreography, meaning they might miss Samoa, their second destination after Hawaii, and be forced another 1,000 miles south to Fiji. 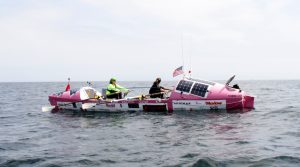 The girls worked endlessly and inexorably, but not tirelessly, toward their goal.   Emotions ran like the seas, highs and lows with eventides. But there could be no doubt about the deep love and trust and dependency that evolved amongst them and was in powerful evidence as one of the threads throughout film – and journey.

Calling themselves the “Coxless Crew,” the quartet rowed “to help beat Breast Cancer,” a disease that claimed one of their closest friends, a new mother—a young mother.

Viewers will walk away from this film with smiles, cheers and tears, as did the girls.   But one thing the audience will not share are the hill-sized callouses the girls developed on their hands over the months – callouses that certainly proved these endurance athlete/adventurers truly are to the core different than the rest us.

“Losing Sight of Shore” screens on April 23 at 11:45 a.m. at The Triangle in Costa Mesa. Visit NewportBeachFilmFest.com for tickets.