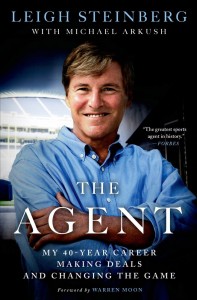 “SHOW ME THE MONEY!”

Just the mention of this phrase calls to mind the iconic film scene in which Jerry Maguire, portrayed by Tom Cruise, is literally shouting from the rooftops in order to retain his client, a top athlete.

While this scene was oddly prescient of another manic, couch-jumping, Tom Cruise moment that was yet to come, it also paid tribute to how far sports agents are willing to go to prove themselves to their clients as their best representation option. Big name prospect says jump, agent says, “Show me the money!”

As America fell in love with Jerry Maguire, and his desire to separate himself from his oily, leave-your-integrity-at-the-door, fellow agents, what they may not have realized was that this character was based on a real life man, trying to do his job the same way.

In fact, Mr. Show Me the Money was inspired by none other than sports super agent, Leigh Steinberg.

In his new book, “Agent:  My 40 Year Career Making Deals and Changing the Game,” Steinberg shares his personal journey, from Berkley student to superstar, to rock bottom, and hopefully, back again.

Now, he will be visiting Newport Beach as he stops at Barnes and Noble, Fashion Island, on Thursday, Oct. 1, to discuss his memoir, and sign copies of the book.

Steinberg is set to appear at 6 p.m.; it’s a presentation that fans of the sporting world won’t want to miss as he lifts the cover on the behind the scenes goings on of this high-powered money machine.

Steinberg did both his undergraduate and post-grad work at Berkley, and while there, served as a Resident Advisor for 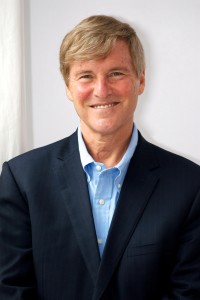 his dorm. It was in this capacity, while he was still a law student, with no ambitions towards sports representation, that he came to know the Cal quarterback, Steve Bartkowski. As Bartkowski prepared to enter the 1975 NFL draft, he chose an unlikely guy to be his agent – his fellow Golden Bear, Leigh Steinberg.

Bartkowski would go on to be the number one draft pick that year, and Steinberg would go on to help pioneer a field that barely existed in the mid-seventies, rising to the top of the field as an agent, and amassing a staggeringly impressive client list along the way.

Steinberg is most noted for his NFL clients, particularly those at the illustrious QB position. His football clients have included eight number one draft picks, and 60 first-rounders, as well as such household names as Troy Aikman, Steve Young, and Ben Roethlisberger, not to mention top non-football athletes, like Oscar de la Hoya.

Steinberg also became known for his desire to make a difference in the world through philanthropy. Throughout his career, he actively supported countless charitable organizations, and for years, held an annual Charity Bash in conjunction with the Super Bowl. His clients were also encouraged to use their star power and sizeable bank accounts to give back, and it has been said that later in his career, Steinberg would forego representing athletes who didn’t have charitable aspirations.

For all the good Steinberg has done, his name has also become a cautionary tale, as those at the top of their game have a lot farther to fall when the bottom drops out.

Through a series of unfortunate events – losing the better part of his client list to a protégée who betrayed him, a divorce, and a descent into alcoholism –Steinberg would see the undoing of a high-powered career decades in the making.

But, as we all know, when you hit the bottom, the only way to look is up. After declaring bankruptcy, Steinberg began to focus on personal redemption, starting with his sobriety.  Now, with four years under his belt, he is launching his comeback, and hopes to lead a new generation of athletes to become agents of domination on the field, and agents of change in the world.