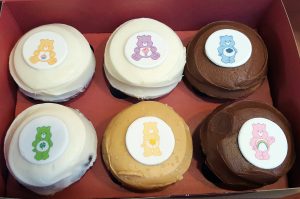 Sprinkles Cupcakes, which has a store in the Corona del Mar Plaza, has partnered with Care Bears on a line of limited edition Care Bear cupcakes to celebrate Care Bears’ 35th Anniversary.

The Care Bear cupcakes will be available through January 25 at all Sprinkles locations.

In addition to the cupcakes, whisper words will be revealed weekly on the Care Bears and Sprinkles Instagram pages, with instructions for fans to redeem freebies and special goodies at check out.

“Our freshly baked, handcrafted cupcakes bring our customers cheer and delight, and we think the loveable, huggable Care Bears evoke those same feelings,” said Nicole Schwartz, vice-president of marketing for Sprinkles. “We are thrilled to be partnering with Care Bears.”

About Care Bears: First introduced by American Greetings in 1982 through consumer products, greeting cards, and later an animated CGI television show, Care Bears has become one of the world’s most popular and endearing children’s properties.

About Sprinkles: Sprinkles opened its first cupcake bakery in Beverly Hills, and is credited by the Los Angeles Times as “the progenitor of the haute cupcake craze.”  Founded by Candace Nelson, judge on Food Network’s hit show “Cupcake Wars,” and husband Charles, Sprinkles Cupcakes are handcrafted from the finest ingredients and contain no preservatives, trans fats or artificial flavors.

In 2012, Sprinkles launched Sprinkles Ice Cream & Cookies, which has a store next to Sprinkles Cupcakes in Corona del Mar.