Not sure where the term “for the record” originated. As if there is some sort of notepad in the universe keeping tabs and tallies of important and trivial information. Although no one ever actually sees a hard copy of this record, we like to announce when something has been added.

For example, the other day I found myself saying , “For the record, I said we should get gas in Crescent City.”

As we round our way through the forested hills that connect California to Oregon, the orange “Low on Fuel” light mocked us. Matt used our navigation system to find out where the nearest gas station was and then, like a 6th grade word problem, he calculated known variables – number of miles until the gas station, how much gas we had, and how many miles to the gallon we were getting – to find out X , the spot at which we would have no more gas. It was going to be close. Close like, almost winning the lottery but being off by one number.

There was not a cell phone signal to be had.

“We’re not going to make it, I’m going to pull over at the next call box,” Matt said without a hint of concern and within five minutes, he nonchalantly pulled the car off the road and onto the wide gravel area, asked for the Auto Club card, got out of the car and opened up the yellow call box.

I was beside myself.

That’s when I added another item to the great record in the sky. I twisted around in the front seat so I could address the kids, “For the record, this will never happen again on the rest of the trip while I’m driving.”

But Payton thought it was cool, and explained to me that running out of gas is an adventure that every great road trip should include. He and his brother happily amused themselves by throwing rocks off the sloping edge of the shoulder into the valley of evergreens below.

I pictured us marooned for days and quickly did what anyone in my position would do. I started eating.

Aside from panic eating, I thought I would use the next several days on the side of the road as an opportunity for homeschooling and pulled out the big Civil War book with several photographs of artifacts, people and places on each page with brief explanations.

For the record, those large yellow call boxes do work.

The guy in the tow truck with the red plastic jug of gas arrived in 45 minutes. Just enough time for me to make my way halfway through the chip bag, and read aloud to no one in particular about Edmund Ruffin, the man who fired the first cannon shot at Fort Sumter and began the Civil War.

We pulled off the gravel and back on to the road no worse for the wear, just a few things added to the record. 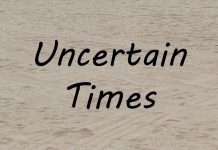 Fashion Island is Committed to Community

Life can be Messy