As a child my hero was Superman. I watched his shows, read his comics, and over the past four decades have seen every Superman movie to hit the theaters.

I recently put on my “cape” and, using advanced genetic techniques, actually became a gene-spliced recombination of Superman and Aquaman as I donned a water-thrusting Jet Pack that pushed out about 500 foot pounds of thrust, enough to carry the pilot (me) soaring 30 feet in the air. 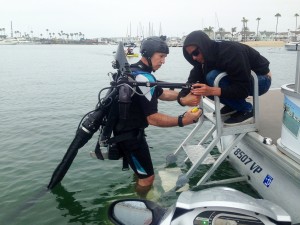 Jetpack America has three locations: Newport Beach, San Diego and Florida. Flights range from 15 minutes to 50 minutes. The 15 minute flight, which I did, is a great introduction since it allowed me to overcome my initial paranoia and develop a feel for the controls.

It also allows time to learn the process, since you do not have throttle control. This is done by a young pilot assistant, Eric, who spoke to me through my radio headset and kept me focused on what I needed to do.

The support team which watched over me was exceptional, very patient, and even after five face plants in the water which caused me to wonder if I would ever get up (I did), they encouraged me and showed patience above and beyond.

When asked what percentage do get airborne on their first visit, Tex, our pontoon pilot, said “about 90 percent.” 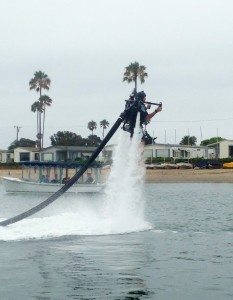 and how to maneuver.

The flight level adjustments are very subtle, very small, so the initial feel is to over-correct, which causes the crash landings. After you get a sensitivity “sense,” it is much easier.

As you actually lift off the water and feel air between the soles of your feet and the water, you can actually “walk on water,” one of the signature Jetpack moves.

You gain altitude and can turn left and right with as little as a look over your right or left shoulders and a slight adjustment of the handles you control.

Another move is the “Submarine” where you actually submerge your body under the water and accelerate a whole lot faster than Michael Phelps even on his best day. I wasn’t bold enough to pull that off, but the gentleman who went after me made it look easy.

Jetpack America offers instructions in English, Spanish and French. Prices run from $159 to $199 (depending upon weekend or weekday) for the 15 minute flight, to $549 for the 50 minute flight.