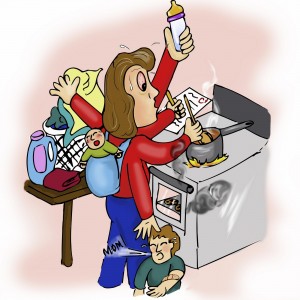 Greek Philosopher Aristotle believed that “the whole is greater than the sum of its parts.”

The technical term is ‘synergy’ and it means that working together, some things accomplish more than what you would expect from adding up what they can do separately.

A house is a common example. The bricks, stone, wood, granite windows and furniture all have value independent of each other. But when put together, the whole (the house) is worth more than if you added up each item that comprises it.

Similarly, the many pieces that make up what moms do to raise kids, when added together, are worth exponentially more than if we simply tallied the parts.

Take the last 24 hours of my life.

Like my sisters in motherhood, I had more things to do than hours in the day, starting with getting out of bed while it was still dark and putting clothes in the dryer, waking kids up, making said kids breakfast and bag lunches and driving them to school. Then there was the sweeping, the dishes, more laundry and emails to write and answer.

Later in the day I was back in the car. After picking kids up from school, I drove people to their various commitments, signed a permission slip, waited in line for the free Lego building event at the Lego store, and put clean sheets on Wyatt’s bed. Made dinner, begged and threatened people to help clean the kitchen and take the trash out after dinner. And so it goes.

It’s incomprehensible, the number of tasks performed by a mother in a given year, month, week, or minute. When taken individually, each thing we do seems relatively inconsequential.

If you added up all the minutes I spent just buckling and unbuckling kids in and out of car seats and strollers, it probably equals a solid six months of my life.

I’m guessing four years have been spent doing laundry related activities and more than that driving everyone everywhere.

We all know that motherhood is more than just making sure that small people are clean, fed, clothed and educated. While we must teach our kids, among thousands of other things how to how to use a fork, ride a bike and go pee pee on the potty, these things alone do not create synergy.

But somehow we have more to show for our efforts than living with people with straightened teeth who can list the state capitals and empty the dishwasher.

The art of raising children creates synergy. But it comes from the love that fuels everything we do. Even on a bad day.  It is the unplanned and unexpected spaces between the orchestrated parts. The first time your baby thinks something is really funny and laughs hysterically. A moment of empathy displayed by your child when he doesn’t know anyone is watching.

The whole worth of our family, of our children, will always be worth more than the sum of the (often messy) parts of which it’s made.