Restaurateur David Wilhelm, whose previous restaurants include French 75, Chat Noir and Chimayo, is back in Newport Beach with his newest concept, Tavern House Kitchen + Bar, that opened last month in the old 3Thirty3 spot which Wilhelm purchased earlier this year. Regulars probably did a double take when they saw the new sign outside the restaurant, because the changeover was relatively quick.

I popped in for brunch last weekend to try the new menu and check out the restaurant. The brunch menu lists a dozen starters, but the BBQ chipotle bourbon oysters with garlic butter and pecan wood smoked bacon caught my eye. Wilhelm told me he had tried smoked oysters up north and decided to create his own unique version.

The oysters were excellent, as was the Maine lobster and shrimp club sandwich with avocado, tomato and smoked bacon on grilled sourdough. The sandwich was huge, with generous chunks of lobster and shrimp. I’ll be back soon to try the dinner menu and offer a full report.

Tavern House is open for dinner nightly, and for weekend brunch. There’s also a happy hour menu served from 3 to 6 p.m.  Visit tavernhousekb.com. 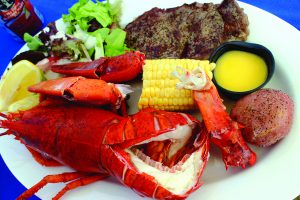 This celebration of summer is now in its eleventh year, and raises funds for deserving charities: Make-A-Wish Orange County and the Inland Empire, Leadership Tomorrow Newport Beach, and Les Dames d’Escoffier LA/OC Chapter.

Tickets are $65 general admission which includes one lobster ($25 for additional lobster) and the other dishes.

Gobble Up These Thanksgiving Dining Options in Newport Beach