If they brought with them but a memory, photograph or a tender letter, virtually every new resident to the United States will have carried something cherished to their new homeland.

Filed lovingly among their family records when Juliana and Andre’ Gomes moved from the modern Brazilian city of Brasilia to Irvine in 1998 was something of such great taste that there was no way Juliana would have departed without it: her grandmother Izinha’s “secret” seasonings recipe.

Perhaps the combination of ingredients offer more than just tastebud glory, for Izhina lived to be 95-years-old.

In 2015, the Gomes decided that Newport Beach would best fit their athletic and outdoor lifestyle. Andre’ had been a star player on both the amateur and professional levels of the Brazilian National Volleyball team and a champion beach volleyball player.  His son Gustavo plays on the UCI volleyball team.

Juliana (nicknamed JuJu) and her mother grew up watching Izhina prepare her special seasoning, and Juliana can’t remember not ever having meat or fish without that enhancement. The same goes for their daughter, 17-year-old Gabriella, a soccer player for CdM High School.

One might surmise that grandma collected the rare makings from the steamy forests around her home, but Juliana surprises by revealing that the garnishment simply consists of seven, easily found condiments: garlic, onions, green onions, parsley, lemon juice, salt and pepper.

Her “secret” lies not in the commonly available ingredients, but in the proportions and blending processes, Juliana shares. After all, her family recipe is a refinement nearly a century old, the taste of which she describes as “savory garlic in a perfect balance of spice and salt.”

At the behest of friends, and with her family’s encouragement, Juliana decided to market what had been exclusively the family’s secret flavor, in large part, she says, “because I know many very busy people that don’t have time to cook sophisticated meals, so my seasoning can be a great help for them. Also, I would love to help people shift their perception about cooking from being hard and difficult to being fun, easy and delicious.”

Two years ago, Juliana began thinking about marketing her seasoning, which she has branded JuJu’s Flavor. She formulated the process herself to make sure that every batch will be exactly the same, then she took the final product to the lab to assure “safety and quality.”

Perhaps the most difficult ingredient in the formation of her new business was not the production itself, but the researching of the legal requirements to open a business and to be able to sell a food product.”

Currently, Juliana does it all herself from a commercial kitchen in Costa Mesa: buying, washing, cutting, blending, measuring, packaging and selling.

“Thankfully, my daughter helps me with social media and all the other little things related to the business,” Juliana shared. 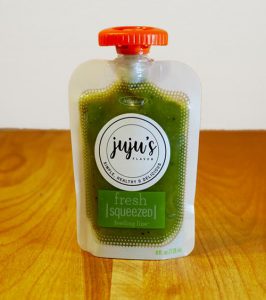 “You can cook basically anything with it: steaks, lamb, pork, chicken, fish or shrimp. It can be used while sauteing or roasting any vegetable. But it’s great on side dishes, too, such as rice, mashed potatoes or in soups – virtually anything you’d use garlic on,” she said.

As with any recipe approaching its centennial, there are tricks and tips with its application, which are shared on Juliana’s Instagram site: @jujusflavor.

“After a few tries, you really get to understand the flavor, and soon enough, you will be able to season anything according to how much flavor you want added in your food,” said Juliana.

“I know that my business will grow one family, one meal at a time,” she said.

Juliana already has many repeat customers, so don’t be surprised if JuJu’s soon gives A-1 Sauce and Lea & Perrins a run for their money.