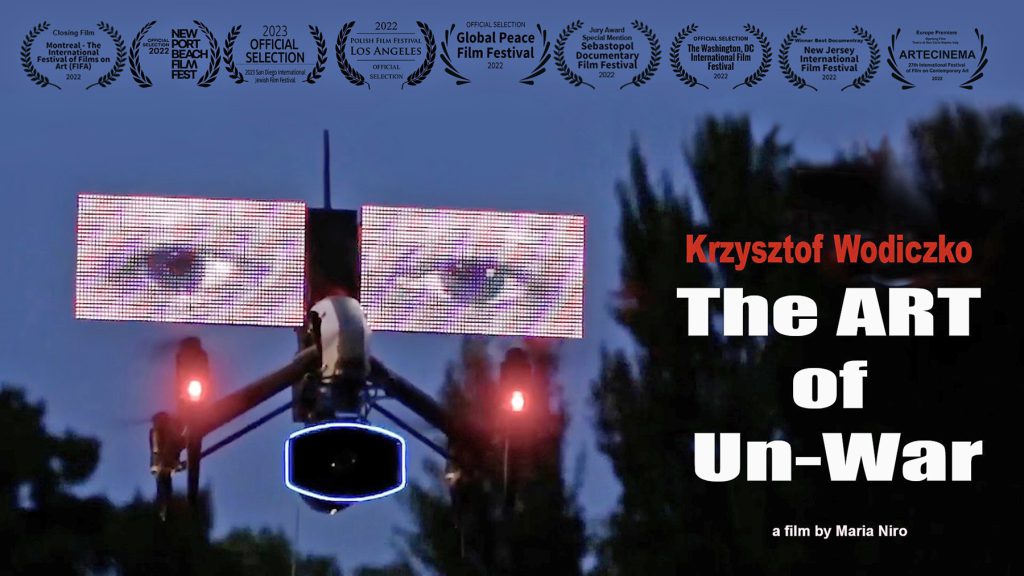 By Morgan White | Special to the NB Indy

Directed and produced by Maria Niro, the social injustices of international warfare are revealed through Wodiczko’s animated art and passion for world change.

The documentary includes exclusive footage from Wodiczko’s art installations as well as private interviews with Wodiczko, other artists, and exclusive footage portraying his fascinating projections around the world at different war monuments in the United States, France, Canada, Japan, and South Korea.

This intriguing film not only investigates the depth of Wodiczko’s story, but also questions the moralities of war and change, both in revealing detail.

The film begins with Wodiczko’s art projection at the Abraham Lincoln memorial in Union Square, New York. The cinematography used for these projections made this installation incredibly impactful. The artist captures specific parts of the body and projects them onto parts of the statue, bringing the sculpture to life.

The camera angles, movement, and distance are strategically articulated to emotionally immerse the viewer into the hands and eyes of the projection. Listeners don’t just hear the message, they see it, too.

Wodiczko turns historical monuments and buildings into living bodies. These bodies represent the people who work in these buildings as well– all distorted from the truth behind why those buildings were initially there. Wodiczko opens up the possibility of animating monuments and war memorials to “reveal their true function of perpetuating war.”

From here, Wodiczko takes us back through his memoir and the story behind his social engagement. His touching life story explains the evolution of his art progression with each project he creates; his most reforming installation in Paris, at the Arc De Triomphe war monument. Can you imagine the Arc De Triomphe surrounded by scaffolding and metal? Wodiczko can, and he did.

Hearing a story without seeing a person’s face, but instead their hands or eyes, creates a bond of trauma between the listener and the monument. There’s truly nothing in comparison to the emotional effect Wodiczko successfully achieved through this projection.

Further into the film, we’re taken to Tompkins Square Park in New York City and  Wodiczko’s most selfless contribution to society regarding the homeless population and their unheard stories. He notes that we live in a world that could easily take care of everyone that inhabits it.

The Art of Un-War brings light to truth. It brings hope for peace. Most importantly, it showcases the dedication Krzysztof Wodiczko has practiced throughout his life to bring world change through art and intervention.

Wodiczko is a one-of-a-kind revolutionary artist, and his passion is seen through his work. This documentary opens up the possibility of a war-free world and executes this message in such creative interventions.

If you’re someone who values art and peace, this film will open up even more perception about what we do and don’t know about war.

“The Art of Un-War” screens Monday, Oct 17 at 5 p.m. at The Lot 4 theater. Visit www.NewportBeachFilmFest.com for tickets.