From the mid-1940s to around 1958, my dad operated Port Orange Deep Sea Fishing along Mariners Mile. By 1958 the commercial fishermen had wiped out the sardine population and until 10 years ago we were never able to use sardines for bait, so we’re happy to see their return.

During that era, fishermen were able to catch albacore and tuna three to twelve miles from Newport Harbor. These species changed their migration patterns to southerly and much northerly areas where the sardines still thrived. Due to the lack of tuna, my grandfather sold his 300 feet of bay front (and across the street, to Arnold Haskell.

For many years Arnold Haskell worked for Moses Sherman. Mr. Sherman was a very savvy businessman and a large landowner. Hence, Sherman Oaks in the valley, with the major street names of Sherman and Haskell Boulevards. When Mr. Sherman passed, Arnold Haskell and Mr. Sherman’s two daughters were named benefactors of the large estate.

Mr. Haskell created the most elegant restaurant Newport had ever seen: The Stuft Shirt, in the modern building that still stands but now is a high-end ladies apparel shop.

On the easterly portion he created Ardell Yacht and Shipbrokers. If you notice, Ardell is a shortened version of Arnold Haskell. 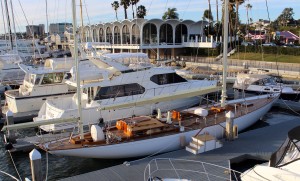 He also obtained Chubasco, one of the fastest yawls of its time. Not too long after these businesses evolved, Mr. Haskell passed and his nephew, Don Haskell, obtained the estate.

Don Haskell grew Ardell into a very lucrative enterprise and raced Chubasco for many years. Don Haskell won the Transpac race (Los Angeles Harbor to Hawaii), in 1959. He also envisioned the future of yachting in Florida and opened a branch of Ardell in Ft. Lauderdale, which also has been very successful and operated by a close Newport friend and graduate of Newport Harbor High School.

Shortly before Christmas last year, Don Haskell passed away. Two weeks ago escrow closed at the Mariners Mile Ardell property. That’s some expensive real estate. Ardell Yachts will permanently close its doors at the end of this month.

I was informed Chubasco had been donated to Orange Coast College and will be sold. Chubasco has been maintained, with no expense spared, to always be in better-than-new condition. Along with Windward Passage, these two famous sailboats berthed at the Ardell site have had owners who maintained these vessels in true yacht high standards. I suspect less than a handful of the thousands of yachts in Newport Harbor are in equal condition. These standards were somewhat common in my youth of the 1950s but rarely observed in our present times.

If there are any yachtsmen left that can appreciate a true yacht from a bygone boating era, I hope you will take a look. It would be a shame to see her, like so many in our past, leave Newport Harbor. She can probably be obtained for a fraction of her replacement value, but her maintenance will be a little pricey by today’s standards. She really is a work of art. Collectors, please don’t let this get away from you.

One last thing: two weeks ago I photographed a whale one mile off the Newport jetty. The water was sloppy, the whale was moving and I never knew where he would surface. Federal wildlife regulations require vessels stay at least 300 feet from whales. Davy’s Locker and Newport Landing on the Balboa Peninsula have regularly scheduled trips for those without their own yacht. I recommend you look into it. The kids will never forget it!