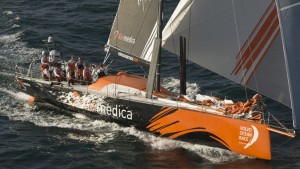 How do you “fly” down the face of a 50-foot-high Southern Ocean swell, topped by a breaking wave that the world’s best surfers probably wouldn’t (or shouldn’t) contemplate challenging?

“You look for a natural exit and pray for the best,” said Charlie Enright, skipper of the 65-foot sloop Team Alvimedica (the only American sailboat to compete in the 2014 Volvo Ocean Race) at an ExplorOcean lecture earlier this month.

In those extreme conditions, rocketing down a frothy face, the helmsman must always defensively steer with the thought of pitch-poling always weighing heavily with every rudder correction

“Luckily, our boat rode fairly bow up,” Enright said. Be that due to steering expertise or hull design, Enright didn’t say.  For the nautically un-christened, to pitch-pole is to drive a boat’s bow beneath the ocean surface, causing its stern to flip forward over the bow.    Imagine the worst of this end-over-end misfortune, and that is the probable result of such a mishap.

Enright and co-skipper Mark Towill, self-described ocean-racing novices with only four preparatory blue water competitions under their keel, shared highlight videos of their nine-month-long participation in this king of ocean races as part of ExplorOcean’s 2015-16 lecture series at the City Hall auditorium last month.

The packed audience, many among them serious boaters, “oooh’d” and “ahhh’d” at the dramatic footage from 55-degrees south latitude, where more often than not Force 10 winds drive swell-upon-swell to frightening wave heights since no landmass interrupts the energy that dictates wave growth. So dramatic was the action that ExplorOcean should have issued Dramamine.

Helping to control the craft at high speeds – up to 35 knots per hour – the boat featured two rudders, two dagger boards and a deep swinging keel that always hung vertically downward no matter the boat’s point of sail. This engineering concept always kept the keel at an angle of heel totaling no more than 20 degrees.

Competing in such a global adventure doesn’t come cheap. It costs a minimum of $15 million to enter, Towill shared. In fact, raising that amount for the next race in 2017 is in itself a skipper’s challenge that takes uncommon creative and nonstop corporate navigation.

Sponsors demand return on investment, another real-world challenge, since open-ocean racing appeals to a relatively small global audience. To that end, Enright and Towill must master two realities: the corporate/PR universe and the unpredictable seven seas.

For the first time three years ago, race organizers demanded that all competitors race the same model boat built by a single manufacturer: a 12,000 pound, hydrodynamic sculpture laid up almost totally of stronger-than-steel carbon fiber. This directive saved sponsors substantial sums in one-off designs, as well as evening the playing field in terms of boat technology and innovation.

In a nine-month-long race, many poignant memories cross under the keel. For Enright and Towill, these include the boisterous seas, being as far from land as anyone can be on Earth’s surface, the rendering of life-saving assistance to a competitor that crashed into an uncharted reef, and the seemingly unending spread of sea debris around the Malacca Straits – indicative of the pollution that is inexorably spreading around the world.

Although other boats struck stuff that on occasion broke dagger boards, or they suffered a de-masting due to weather, Team Alvimedica finished the race relatively unscathed.

Having satisfied its marketing goals, Alvimedica has removed itself from sailing competition. Towill and Enright have formed 55 South, “an American racing team.”  The two currently are charting strategies for major sponsorship to both purchase their boat and prepare for the next ‘round-the-world challenge.

ExplorOcean’s next presentation features Marine Biologist/Educator Holly Lohus, who for 15 years sailed and dive-partnered with Jean Michal Cousteau. Film and lecture is scheduled for 7 p.m., Thursday, March 10 at the Newport Beach Civic Center. Free for ExplorOcean members, $15 for nonmembers. Visit ExplorOcean.org for details.