In case you haven’t heard, The Lot – which opened April 27 with the premiere of “The Avengers: Infinity War” – replaced the Island cinemas. More than just a movie theater, The Lot is a combination restaurant and lux cinematic experience unlike anything else in Orange County. It’s also the brand’s first foray into OC, having opened The Lot theaters in La Jolla and San Diego.

The Lot in Fashion Island features 420 leather reclining seats spread among seven theaters, which means you get an intimate experience no matter where you sit. 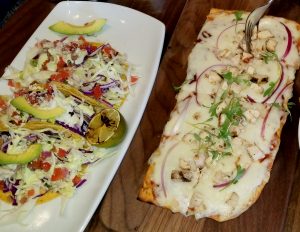 Walk into The Lot and instead of a ticket booth, you’ll encounter a hostess who can seat you at the restaurant or direct you to the ticket counter, tucked away near a ramp leading to the theaters.

The restaurant itself has an indoor/outdoor café, dining area, outdoor patio and a social bar. The ambiance features natural materials, woods, fabrics and comfortable design elements.

I was able to take a hard hat tour the week before opening and saw chefs in the large kitchen working on menu items, and watched workers putting the finishing touches on various elements of the theater and restaurant.

Upon returning on opening day for the ribbon cutting ceremony and to sample several culinary creations, I learned that the restaurant is open for breakfast, lunch and dinner, and makes most items – including pastries – in house. The menu is surprisingly extensive, with an array of dishes guaranteed to please almost any palate. 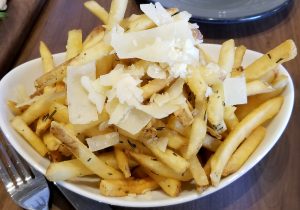 I also chatted with bar manager Thomas Sorrentino, who came to The Lot after having established an award-winning bar program at The Recess Room.

“My goal at The Lot is to create classics with a twist,” Sorrentino told me. “I want people to come here for the bar, and then decide to see a movie.”

Sorrentino has a seasonally-driven bar men with delightful and colorful spring drinks perfect for sipping.

The true test came when fellow NB Indy scribe Norm Bour and I went to The Lot last Sunday to see “The Avengers” and dine at the restaurant. 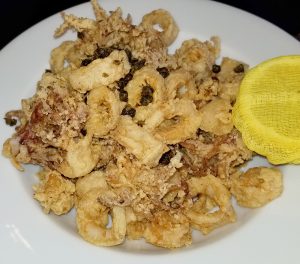 Not thinking it would be that busy, we arrived on Sunday evening at 5 pm with plans to catch the 5:45 screening. We walked in the door and realized everyone else seemed to have the same idea. We were fortunate to get a table, and after purchasing tickets ($17 each) we perused the bar menu and the food menu.

I was tempted to order a cocktail, but Norm was in the mood for a beer. After musing over the list of 16 brews on tap. I settled on Stone IPA ($9).

The wine list is surprisingly extensive, with Silver Oak, Goldeneye, Quintessa and Dom Perignon among the notable brands. 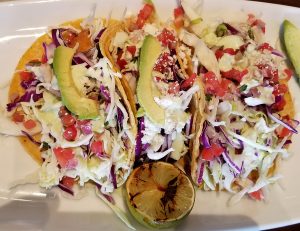 The food menu is also extensive and creative. Norm and I decided to share an order of fried calamari ($15), truffle fries ($9), BBQ chicken flatbread ($16), and an order of fish tacos ($14).

We devoured most of the food as it arrived, agreeing that each dish was delicious and perfectly prepared. We took some of the flatbread and fries to go, thinking we might eat them during the movie.

We found our way to our seats just as the movie started. We were in the second row, which in most theaters is usually too close to the screen but in this case proved to be a perfect spot to recline the seats and get immersed inside the “Avengers” world.

The screen is wall to wall, and the sound system is nothing short of spectacular. It is as immersive as you can get, and we forgot about our leftovers as we became sucked into the story and special effects of “The Avengers.” 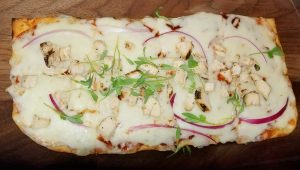 I won’t give away the plot, but this “Avengers” is dazzling from start to finish, with more superheroes in one film than ever before. If you’re a Marvel film fan and have seen most if not all of the previous Avengers, Iron Man, Spiderman, Thor and Captain America movies, this “Avengers” brings them all together to battle their toughest enemy yet.

The ending is unlike the other “Avengers” films because it’s obvious a fourth installment is coming to continue the saga.

The Lot is now my go-to movie experience, and a great spot to dine when I’m in the area, movie or no movie.  I’m looking forward to trying the smoked brisket burger next time.

For more information on The Lot, visit TheLotEnt.com.