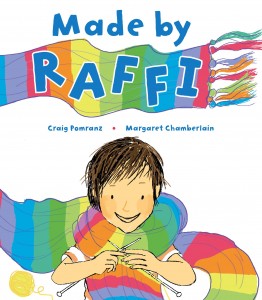 Anyone who can remember being a kid will also remember how hard it is when you feel as though you don’t fit in. Even the slightest step outside of what is considered the norm can brand a child with the label of “different” – something that can definitely be difficult to overcome.

It seems like every day we are met with a new story in the media of a child who was in some way belittled for following a path other than the one deemed as “normal” for their age or gender.

Whether it be a grade-school boy discouraged from bringing his “girly” backpack to school, or a transgendered teen who committed suicide in order to escape the disapproval of her family, it is clear from their stories that a dialogue on the topic has become essential.

Author Craig Pomranz has tackled the task in his new children’s book, “Made by Raffi,” in which we meet a young boy whose interests don’t fall in step with the other boys his age, causing him to question why he is different from his peers.

Raffi is a boy who doesn’t quite fit in with everyone else. When the other boys are running, yelling, and chasing a

ball at recess, he prefers sit by himself. One day, he comes across one of the teachers working on a scarf she is knitting, and excitedly tries his hand at the craft.

From the moment his hands grasp the needles, Raffi knows he has found his thing. He excitedly hurries home to ask his parents for his own set of needles, and after a trip to the yarn store, begins work on a rainbow scarf for his father’s birthday. Every spare moment can find Raffi working on the scarf: at breakfast, at recess, and on the bus.

While happy to have found something he loves so much, Raffi is also confused by the teasing he gets from the other kids, which causes him to question whether or not an activity perceived to be a feminine pursuit is an appropriate hobby for a little boy to have. He asks his mother if she thinks he is “girly,” and she replies with the best possible answer, “No Raffi, I think you are very…Raffi.”

Pomranz was inspired to write this book by his own godson, who at age nine began to knit. Like Raffi, he struggled with not fitting in with the other boys his age, and questioned why he was different, coining the term “tomgirl.”

Pomranz says, “I was fascinated when he came up with the term “tomgirl,” because it brought into focus the huge difference between a little girl who likes traditional boys’ activities – a tomboy – and a little boy who likes traditional girls’ activities. A tomboy is admired for her toughness and independence. But “tomgirl” connotes a negative idea: a little boy who is effeminate or weak.

Wanting to create a way to show parents and kids that being different was ok, he set out to write the story that became “Made by Raffi,” in hopes that it would create a safe way for parents, educators, and children to discuss embracing our differences.

By the end of the book, Raffi’s talent has saved the day, when he makes a last-minute costume for the class play, helping the other students realize that being different is cool.

The wise child advocate Mr. Rogers once said, “As human beings, our job in life is to help people realize how rare and valuable each one of us really is, that each of us has something that no one else has–or ever will have–something inside that is unique to all time. It’s our job to encourage each other to discover that uniqueness and to provide ways of developing its expression.”

Thanks to Pomranz, we now have one more tool to help get the job done.