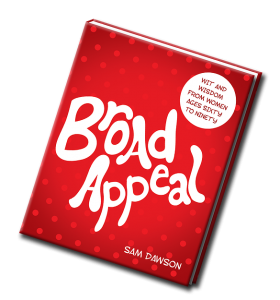 As women, we have been conditioned over the years to believe that once we hit a certain age, it is time to fade into the woodwork. Cut our hair, take up knitting, and quietly enjoy our journey through the golden years into life’s big sunset.

More mature women disappear from the limelight, don’t show too much skin, and above all, become grandmotherly and proper, or so the stereotype goes.

Author Sam Dawson found that while she hated turning sixty, as it represented a loss of youthful freedom, once she got there, she really didn’t feel any different. Although sometimes surprised by the reflection that greeted her in the mirror, she was equally surprised to discover that the additional years she had under her belt didn’t alter the way she saw the world. In fact, she still felt, thought, and acted much as she had in her younger years.

Growing old, she learned, was a state of mind, and despite the fact that while “in the Down Dog yoga pose, (she) could count the wrinkles around her ankles like age rings on a tree,” she wasn’t her mother’s type of old lady. Still fit, vivacious, and open to life’s adventures, she began to wonder if other “women of a certain age” felt the same way she did, or if her internal youth was an anomaly.

As she pondered this thought, she developed the notion that exploring the wisdom of ladies like herself would make for a great book. And so, notepad in hand, Dawson set out to talk to her friends, and their friends, and anyone interested in sharing their story, to see how they felt.

In their interviews, they covered topics ranging from money and health to love and faith. They spoke both of life’s big surprises and big regrets. The women compared notes on body image, marriage, and sex (yes, old folks still enjoy it!) and discussed developing a “give a [email protected] factor” – an ability to be one’s true self, and not be so constantly worried about keeping up with the Joneses.

As Marilyn, age 70, says in the book, “I really don’t give a darn what others think. I know who I am and what I want out of life, and I don’t care if it doesn’t suit someone else.”

How’s that for elderly wisdom. If only these gals could bottle that attitude for the younger generation. Alas, while confidence doesn’t come in a bottle, these ladies have discovered that it is one of the pleasant side effects of growing older.

All told, Dawson spoke with over 70 women, gathering life lessons, and I’m sure, more than a few chuckles along the way. Her new book, “Broad Appeal: Wit and Wisdom from Women Ages Sixty to Ninety,” compiles their quotations into a volume that squashes stereotypes, and celebrates the fact that life does not end when your children leave the nest, or when you retire, or heaven forbid, when you turn the calendar page that ushers you into a new, dreaded decade.

Hot on the heels of her recent appearance in Newport Beach, Dawson will also be visiting Laguna Beach to impart the collective wisdom of a generation (or two) of women, and sign copies of her book.

It is Dawson’s hope that the over 60 crowd will find comfort in the fact that they are not alone in their feelings about growing older, and that younger women will discover that there is nothing too dread about the prospect. On the contrary, our last trimester of life can be rich, freeing, and fulfilling.

And Dawson is a broad who knows this truth, wrinkly ankles and all.