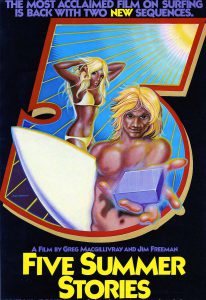 The Newport Harbor High School Alumni Association has found a fun way to fundraise amid a challenging charity season.

On Sunday, Oct. 18 at 5 p.m., the Alumni Association will be hosting an on-line viewing of the classic 1972 surf film “Five Summer Stories” followed by a live interview with filmmaker Greg MacGillivray (NHHS Class of 1963) and musician Tris Imboden from HONK (NHHS Class of 1969), which performed the innovative soundtrack to the movie.

These two NHHS Alumni Hall of Fame honorees will discuss their memories of making the film and answer questions posed by the audience in the comments:

Greg MacGillivray co-founded MacGillivray Freeman Films and went on to make Academy Award nominated productions. These include the IMAX documentary “To Fly” which plays at the Smithsonian’s National Air and Space Museum, and the IMAX blockbuster “Everest,” which shattered records as the highest grossing film of its type.

Tris Imboden was the founding drummer for HONK and became a member of the Kenny Loggins Band. He played with the multi-platinum band Chicago from 1990 until 2018 and was inducted into the Rock and Roll Hall of Fame in 2016. He has also recorded with Neil Diamond, Stevie Wonder, Crosby, Stills & Nash, and Al Jarreau.

The cost to view the film is “Pay What You Can, with all proceeds benefitting the NHHS Alumni Association Scholarship Program.

According to information received from the Alumni Association, they want to make sure people anywhere can view the film, so there is no set price. All donations are appreciated as the proceeds will support their Scholarship program, which has given away $44,000 in the past four years to help the career dreams of worthy students come true. Learn more about the program here: www.NewportHarborAlumni.org/scholarships

To reserve a spot to watch the film on Oct. 18, and to donate, go to www.NewportHarborAlumni.org/five-summer.

Since its founding in 1930, Newport Harbor High School has proudly served its community as a California Distinguished School, National Blue Ribbon School, and International Baccalaureate School. The Newport Harbor High School Alumni Association is committed to honoring this legacy by engaging students past and present, supporting the scholarship program, maintaining the campus museum, and preserving the school’s rich heritage. Visit www.NewportHarborAlumni.org for more info.