A century-old Newport Beach holiday tradition returns on December 19 when the Christmas Boat Parade sets sail for the first of five nights, with nearly 100 decorated vessels slowly cruising the perimeter of Newport Harbor under the delighted gaze of more than one million onlookers.

Presented by the Commodores Club of the Newport Beach Chamber of Commerce and hailed as “one of the top ten holiday happenings in the nation” by the New York Times, the Christmas Boat Parade’s theme this year is “Surf, Sand and Santa!”

The parade starts off Bay Island at 6:30 p.m. and finishes at the same site at approximately 9:00 p.m. each evening.

Beautiful multi-million dollar yachts and a variety of small boats will light up the harbor. Many boats will be decorated with animated Christmas scenes accompanied by music and costumed carolers. Some boat owners in the past have spent more than $50,000 to decorate their vessels for the event.

That’s much less than Italian gondolier John Scarpa needed in 1907 when he took a group of visitors across Newport Bay in a gondola decorated with Japanese lanterns. A year later, on July 4, 1908, Scarpa and other small boat operators put together a loosely organized parade of nine illuminated vessels led by Scarpa’s gondola and followed by eight canoes.

The Christmas Boat Parade was born–on the Fourth of July.

The parade – then called the Illuminated Water Parade – was held annually during the summer until after World War II, when the parade became so popular that traffic along the parade route became too congested.

The parade shifted to December and was rechristened the Christmas Boat Parade. Traffic is still congested, but not as bad as during the summer.

Serving as a backdrop for the lighted boats in the parade is the annual “Ring of Lights” contest, hosted by the Commodores Club.

Dozens of bayside homes and businesses surrounding the harbor are elaborately decorated with everything from roof-top animated scenes to dancing Christmas trees to giant inflatable characters. With its own judged categories and prizes, the “Ring of Lights” has become as celebrated as the boat parade itself.

On Sunday, the final night of the parade, a special fireworks display launches form the end of the Balboa Pier at 9:00 p.m. 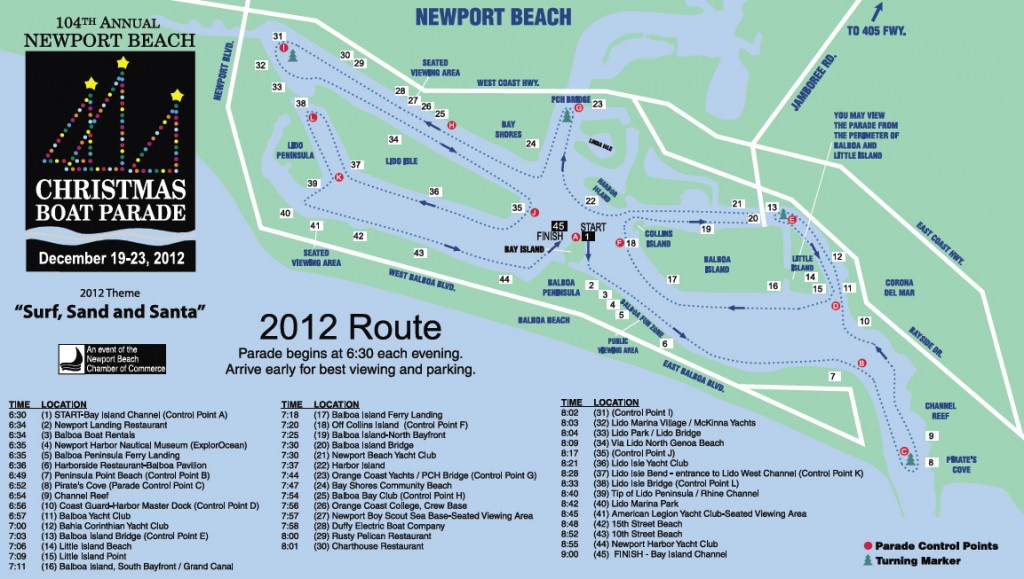 The Balboa Fun Zone offers plenty of public viewing spots, and it’s where Boating Radio host Mike Whitehead provides commentary on the parade. Admission is free and parking is available in the public lot next to the Balboa Pier, but get there early as parking lots tend to fill up fast, especially on the weekend.

Some restaurants, such as The Cannery, are near the parade route and require a short walk to access a viewing area, such as the Lido Island bridge. .

Many local yacht charter companies take visitors out on the bay to watch the parade.

To erase parking difficulties, take a taxi to either Balboa Island or Balboa Peninsula. The fare is worth avoiding the parking hassle.