The 2nd annual “Tribute to Champions of Hope” Gala at the Balboa Bay Resort last weekend was a rare event–rare in that it was an undeniably moving and heartfelt affair, and that it raised more than $370,000 for people who suffer from rare diseases.

We’ve attended many charity events but were unfamiliar with Global Genes | RARE Project, yet the more we learned about the organization the more intrigued we were with the facts: It is estimated that it takes on average five to seven years for a patient suffering from a rare disease to receive a proper diagnosis, and in fact many patients receive up to two or three misdiagnoses, draining hope and finances from affected patients and their families.

Enter the Tribute to Champions of Hope gala, which funds the tools and resources to support the global rare and genetic disease

community as well as Global Genes | RARE Project’s partners in the area of diagnosis and research.

Numerous awards were presented during the evening that recognized key innovators and pioneering leaders in the rare and genetic disease community. Each recipient was well-deserving, but possibly the most touching and funny moment came from six-year-old Dylan Siegel, RARE Champion Award for Advocacy who penned “Chocolate Bar Book” for his friend with a rare liver disease, six-year-old Jonah Pournazarian.

“I love that he sold copies of his book to make money for his friend,” noted Catherine. “They also did a great job of getting celebrities that had gone through medical issues and who were willing to share their stories and therefore make an impact on the evening.”

Those celebrities included Emmy-nominated recording artist Andrew McMahon, a singer/songwriter best known for his bands Something Corporate and Jack’s Mannequin. McMahon suffered from Leukemia, and showed a short documentary about his experience before performing three songs on the piano.

“It was an extremely moving Gala,” stated Catherine. “Every person that spoke or was honored had a unique story that moved every person in the audience to the point where women were regretting putting on mascara that night. From the speakers, to the awardees, to the performers; every part of the program tied in to the Global Genes RARE project in some shape or form. Each story was unique and touching and brought outsiders into the often frustrating world of rare diseases.” 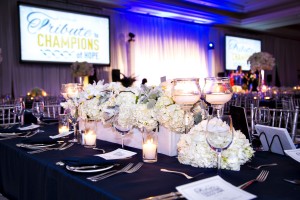 is, as more people understand the unique set of healthcare challenges facing rare disease patients and their families, they will be inspired to take action and get actively involved in this movement,” she said.