Fresh off a big win on the east coast, the Orange County Breakers kicked off their home opener with another solid win on Saturday in front of a large crowd of local fans.

After finishing off the New York Empire 22-15 on July 18, the Newport Beach-based tennis team headed back to the west coast to continue their winning streak.

The Breakers beat the San Diego Aviators 24-17 at their home court at Palisades Tennis Club in Newport Beach on Saturday.

The large crowd had a great energy and watched a fabulous match, Breakers coach Rick Leach said in a team announcement shared on Sunday.

“It feels so great to be back home in Newport. We had an unbelievable crowd,” Leach said in the prepared statement. “The standard was so high; it was just a pleasure to have Vika (Victoria Azarenka) come join us.”

Azarenka was a great team player, he added.

“You could feel the intensity out there, and she really wanted to win,” Leach said. “She helped all of us tonight.”

Sets were tight until women’s singles, when Azarenka took on Danielle Lao and got an early lead. Azarenka earned a dominant 5-1 victory, putting the Breakers to a 0-7 overall lead.

In women’s doubles, Azarenka and Andreja Klepač won three deciding points to defeat Lao and Anna-Lena Grönefeld 5-4(1) to give Orange County a 19-14 lead heading into the final set, Breakers officials wrote in the announcement.

British Breakers Luke Bambridge and James Ward wrapped up the evening with a win in men’s doubles.

That streak was broken on Monday, when the Springfield Lasers came out on top, 19-18, over the Breakers.

The home team got out in front to start the match, with Klepač and Bambridge winning four consecutive games to defeat the veteran duo of Abi Spears and Jean-Julien Rojer, 5-2, officials wrote in a press release shared on Tuesday.

“The 2018 King Trophy champions then chipped into that deficit with Spears and Anna Blinkova winning 11 of 12 first serve points to defeat Klepac and 2016 WTT Female MVP Nicole Gibbs, 5-3,” the message reads.

After a tight match in men’s doubles, Steve Johnson and Bambridge won 5-2 over Rojer and Lopez-Perez.

“Blinkova then snapped a three-match losing streak in singles, earning a big 5-2 win over Gibbs that set up the showdown between Johnson and Lopez-Perez to wrap up the evening,” officials explained in the announcement.

Lopez-Perez got a massive break in the seventh game of the set before serving out the win with a quick hold.

Orange County is in the middle of a four-match homestand, with matches coming up on consecutive days against the Freedoms and New York Empire.

Former Wimbledon finalist Genie Bouchard joins the Breakers Tuesday night when they host the first-place Philadelphia Freedoms at 6 p.m. On Wednesday, the Breakers take on the NY Empire at 6 p.m. 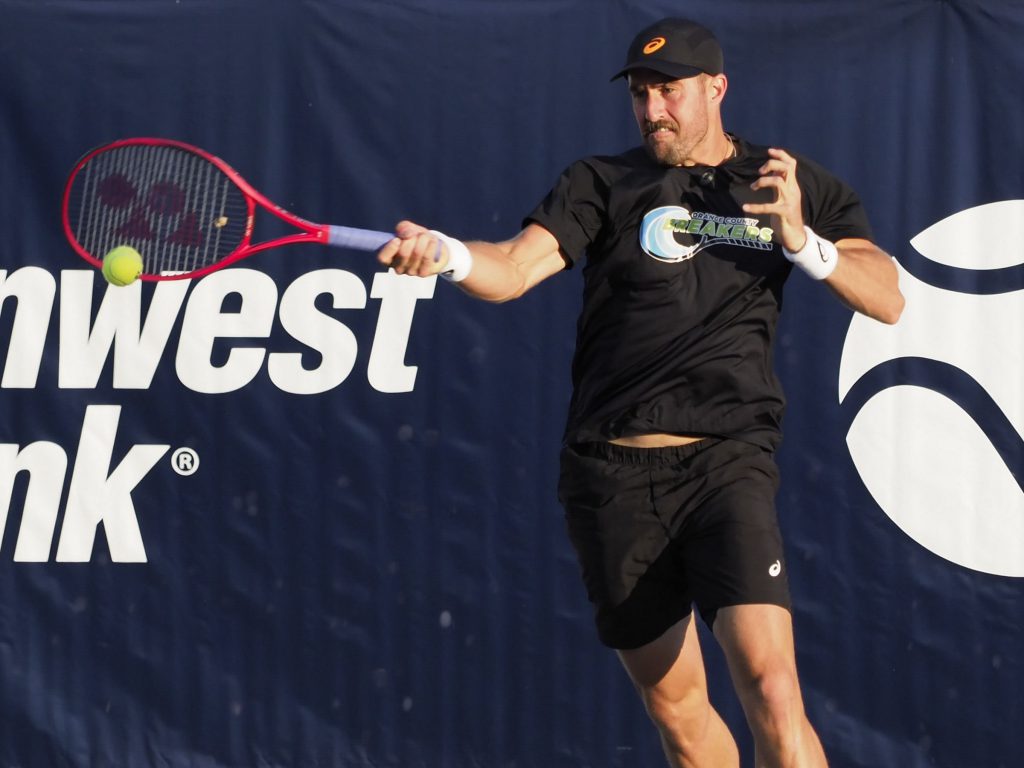 Steve Johnson of the Orange County Breakers during Monday’s match.
— Photo by Lawrence-Sherwin © 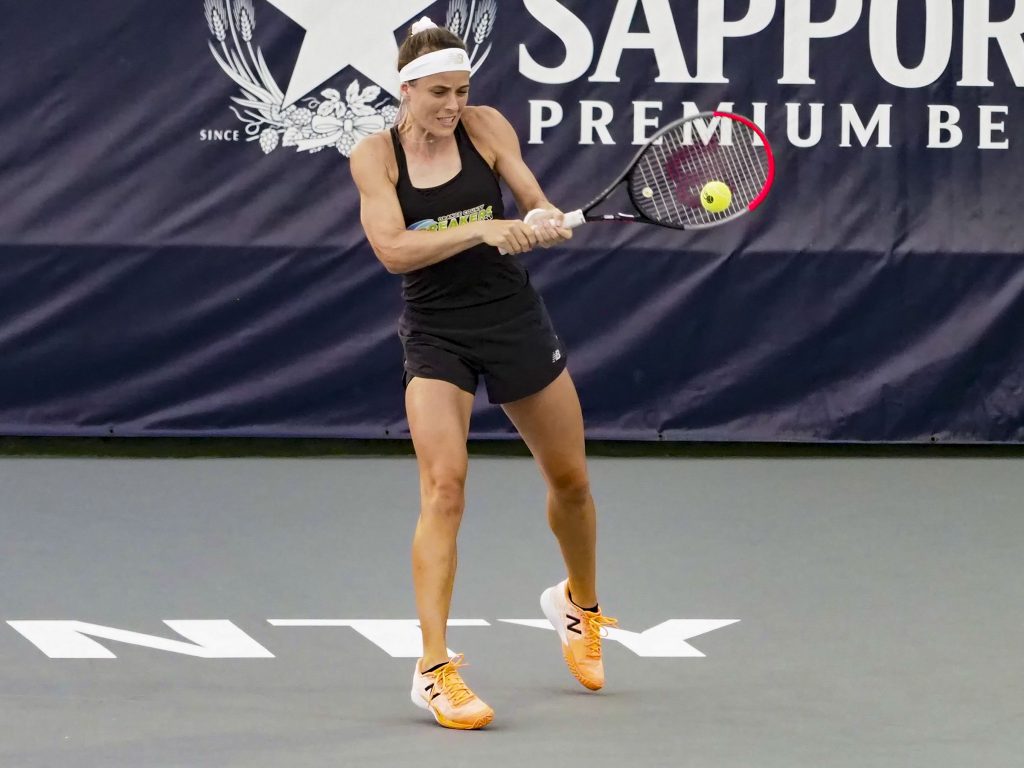 Nicole Gibbs of the Orange County Breakers during Monday’s match.
— Photo by Lawrence-Sherwin © 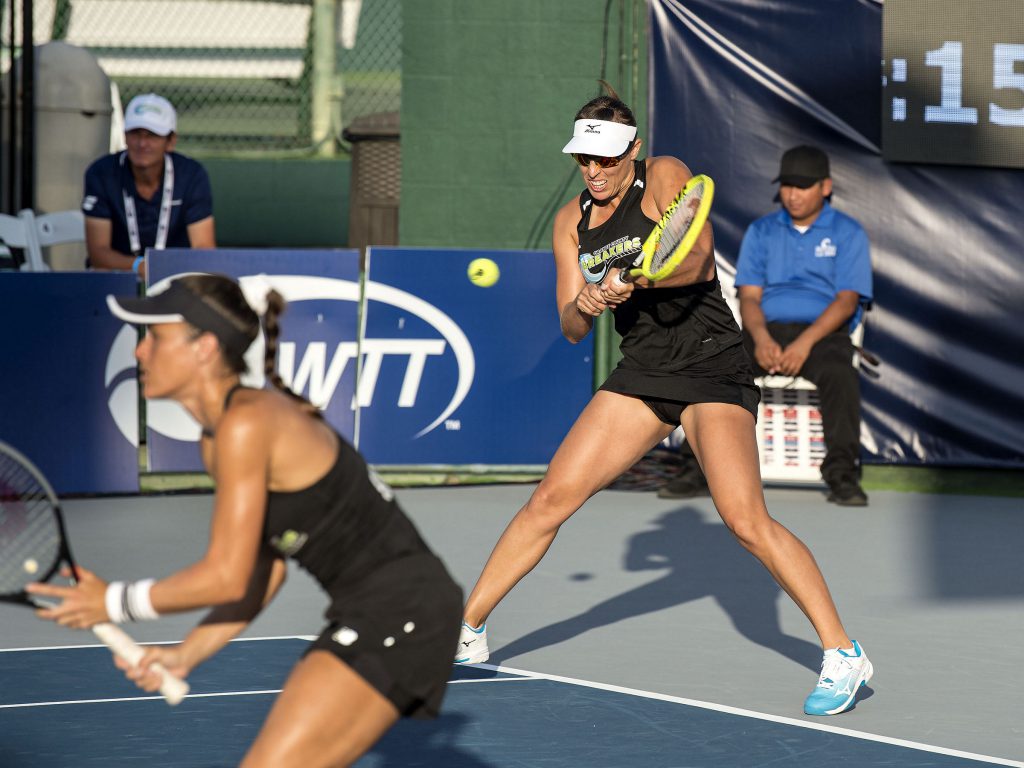 Andreja Klepac (hitting) and Nicole Gibbs during a doubles match on Monday against the Lasers.
— Photo by Charles Weinberg ©