Who knew that dancing the tango and playing the harp could be so simpático?

For award-winning, Irish-born musician Diana Rowan, studying the intense and passionate Argentinian art form known as the tango led to a surprising deepening of her own prowess as a harpist.

She’ll bring those soulful skills to her performance Monday night at St. Michael & All Angels Episcopal Church, where she’ll join countertenor Dylan Hostetter and violinist Elizabeth Blumenstock for “An Evening in Britain,” one of five intriguing British-themed concerts in this year’s 36th annual Baroque Music Festival in Corona del Mar that runs June 19 through 26.

“The way that you hold your body in tango is identical to the way you hold your harp,” explains a fervent Rowan during our recent phone interview. “It’s all about the connection with your chest…Argentine tango is 100 percent improvisation, and you need to stay constantly on your axis. There’s a sense of being grounded; if your partner steps away, you stay balanced.”

That sense of balance also plays out in what Rowan calls the “interesting overlap between folk music and art music” that characterizes Monday evening’s concert. Usually set aside for an organ recital, Artistic Director Elizabeth Blumenstock shook things up a bit this year by focusing on the harp instead.

“An Evening in Britain” chronicles the history of the harp through traditional ballads. Rowan, who will be playing the Renaissance-influenced single-row harp, worked closely with Blumenstock and Hostetter in designing the program.

Grouping songs chronologically by themes, it begins in the middle ages (the height of the harp’s power, says Rowan) and ranges from Irish to Old English.

“It’ll be a really fun journey,” she reveals. “That was our idea—to show the breadth of this instrument.”

“Of course in Ireland and Scotland the harp is a very big deal, but it actually came to Ireland from Africa, and can be seen in ancient Egyptian paintings,” says Rowan. “An ancestor of string instruments, it comes from the bow and arrow and was very popular in medieval times. It stayed alive in Ireland because the bards would go around to aristocratic houses, stay for months, and usually write a song for the lady of the house before leaving.”

“Folk music is so fresh, so very immediate,” she continues. “Often when we think of baroque music we think so much of Italy and Germany, but what’s happening in the British Isles was really lively. Elizabeth has come up with a brilliant theme; it’s really unusual and a great chance to hear both how different it was and how similar. It’s a chance to focus on something you might not hear again.” 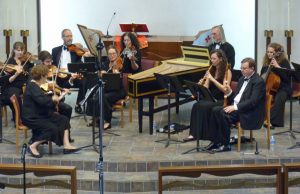 Other concerts in the series include: “The Hanoverian Putsch” at St. Mark Presbyterian Church on Sunday, highlighting Baroque concertos for horns, oboes and strings as well as J.S. Bach’s Brandenburg Concerto No 1; Wednesday’s “Dancing in the Isles,” featuring traditional English, Irish and Scottish medleys for recorder and strings at Sherman Library & Gardens;  Friday’s “A London Salon,” also at Sherman Library & Gardens, with sonatas of the English High Baroque; and the Festival Finale at St. Mark Presbyterian Church the following Sunday, presenting a full concert version of “Purcell’s King Arthur” in celebration of the opera’s 325th anniversary.

Concert audiences are invited to arrive early for each concert to enjoy Baroque music performed al fresco by the South Coast Brass, beginning 45 minutes before curtain time. A “wine and waters” reception follows each performance, when musicians and audience members have an opportunity to mingle for conversation and refreshment. The Festival offers a subscription for all five concerts at $280 that provides priority seating at each event and a private post‐concert dinner following the Festival Finale on Sunday, June 26.