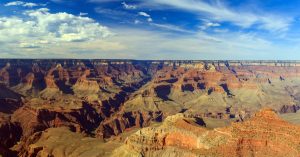 Have you ever found yourself so humbled that it leaves you speechless? I had that experience last week.

I was hiking in the Grand Canyon from the South Rim to the North Rim, impressed with myself for attempting such a feat despite being scared and anxious about being stuck in the middle and not having the energy to hike out the other side.

After spending five hours hiking down the South Rim to the Colorado River and Phantom Ranch, a handful of hikers – including me – were sitting there feeling sorry for ourselves. The temperature was 106 degrees, and our muscles and knees hurt.

It was just starting to get dark when through the shadows came a young man carrying an American flag. Behind him were two young men, both missing an arm.  Shortly after them two more followed. One of the men was a double leg amputee, the other was blind. Yes, blind.

Now remember that they just hiked 14 miles down the North Rim, more than 6,000 feet on paths that are uneven and steep, with sheer drops of 2,000 feet on one side, in extreme heat with backpacks on. And then they were hiking back in two days.

As these men went by, we were silent. We had nothing to say. We forgot about our tired muscles as we looked at these men with much respect and honor.

These men were part of the Wounded Warrior program and Operation Canyon Rising. It is not just about the physical ability to hike the Grand Canyon, it is about setting a goal, creating a plan, and challenging yourself to do what you are unsure you can do.

It is amazing what we can do when we put our mind to it. It takes being committed to work through the challenges and know what our limits are, but not allowing our limits to limit what we can do.

There were others lessons I learned on this hike. A year ago I attempted the same hike and failed due to the weather and not being as prepared as I needed to be.  I came home feeling defeated, and mad at myself.

Being committed to being who you are and following what is important to you is essential in life. We were not put on this earth to spend our time watching television, or on social media or playing games on our computers. Yes there is a time and place for that, but do not allow these things to distract from what is in your soul.  Be careful who you listen to, as many people – often with good intentions – will put doubts in us because of their own fears.

Let me leave you with two quotes from amazing people who were not afraid to go against societies norms, nor what others would say about them.

Helen Keller once wrote that “Life is either a daring adventure or nothing at all.”  And Albert Einstein said “A ship is always safe at the shore – but that is NOT what it is built for.”