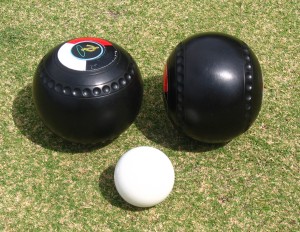 Seventy-five-year-old lawn bowler John Groothuis scoots around the greens of the 75-year-old Newport Harbor Lawn Bowling Club as if he had the heart of a 20-year-old, which in fact he does.

Groothuis attributes much of his transplant recovery to the gentle sport (and art) of lawn bowling.

Groothuis spends more time and seemingly un-depleted energy at the club than most, focusing on membership, recruiting, party planning and socializing.

In large part due to his infectious enthusiasm, and nonstop efforts, he has raised membership to more than 400 “diversified bowlers” in just six years, making the NHLBC the largest in the nation.

“When I joined, the average age was deceased,” Groothuis joked. Today’s age range spans 65-years, from 30 to 95, with the median age being 60.

A former club president, Groothuis is now the “facilitator between the club and Newport Beach, who owns the lawn bowling greens and adjacent tennis/pickle ball courts; they just can’t do enough for us” he complimented.

One of his recruits is Paula Bogenreif, who joined two years ago at the age of 58, simply because “lawn bowling was on my bucket list. I met John, had a beer, and joined that very day. Lawn bowling has been my love ever since,” the retired executive said with a smile.

The City had no idea how successful the sport would become when it inaugurated its first club location in 1939, on the lawn adjacent to the current American Legion Hall on the Peninsula.

In 1972, the club moved to its current site at the corner of San Joaquin Road and Crown Drive North (just east of Roger’s Gardens). Its two greens are open 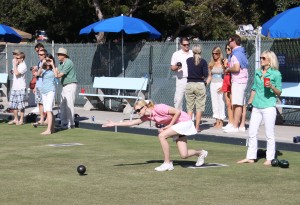 Newport maintains the exterior of the building and its surroundings, but members care lovingly for the clubhouse interior, and meticulously for the 120-foot by 120-foot greens that can best be described as crew cut Bermuda grass atop a lot of leveled and compacted sand. Thus, the greens are free from perceivable undulations.

The exact history of lawn bowling is unknown, but it’s generally agreed that its origins go back more than 3,000 years. The Romans introduced the game to Europe; in 1209, England formed the Southampton Old Bowling Green Club, during the reign of King John.

Lawn bowling has been a popular sport and pastime wherever the sun had set in the British Empire, including England, South Africa, Australia, Canada, Hong Kong, India, and Singapore.

Although purely an amateur sport in the U.S., England, Scotland and others do field professional bowling clubs whose travel and accommodations are fully covered for global competitions. Mostly a sport of seniors here, in the rest of the world, players start as young as age six.

Ten percent of NHLBC are serious tournament bowlers who pay their own ways to wherever competition might be. “That can amount to thousands of dollars,” said the club’s current president, 69-year-old Jan Hargraves, who won a medal in the 2009 finals in Johannesburg, South Africa.

She has been a serious international competitor since joining in 1999. She’s also an enthusiastic coach, who finds great joy in instructing new (and veteran) players when not practicing for the next high-level contest.

Besides a champion’s intensity, Hargraves considers one of her great skills to be “having an eye for potential.” 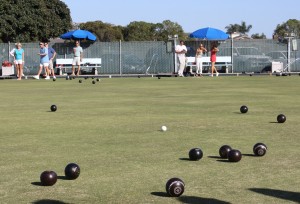 Hargraves and her teammates have amassed an enviable record: Coast League champions the past 10 out of 11 years; California champions four of the past seven seasons out of 34 clubs — with various bowlers having been members of either the USA or World Champion teams 15 times. Considering that there’re only 4,000 lawn bowlers across the U.S. (all amateur), it’s a seldom-recognized accomplishment beyond the club’s fences.

This past September, for the fifth successive year, NHLBC hosted the “USA Bowls Open” at which more than 300 bowlers from around the world battled each other in the weeklong competition. Thirty-four Newport members participated; all ladies who played won in their categories, and member Linda Roberts was named Women’s Bowler of the Tournament.

As the uninitiated drive past and glance to the greens, it would be easy to dismiss the game as a bunch of sauntering seniors rolling little black balls (called bowls) across a large square of grass toward a little white ball (called the “jack”). That, however, would that be a mistake.

The Club’s brochure describes lawn bowling as “a precision sport where the goal is to roll slightly radially asymmetrical balls closer to a smaller white ball than does one’s opponent. Players alternate turns rolling their bowls until all bowls have been played. One point is awarded per bowl closer to the jack than the opponent’s closest. The game continues for a specified number of ends and a winner is determined by the overall score.” Usually, three or four players comprise a team.

This is a game of subtleties. “Easy to learn, hard to master,” Hargraves shared. Men and women are equal in skills. The game is based on technique: coordination, not athleticism, she said. “Golfers can relate,” Hargraves believes, for as on the links, lawn bowling is a game of constant adjustments.

Throughout a game, players must be aware of such things as lay of the grass, length of grass, wind speed and direction, etc.

Then there are teammate considerations, whose personalities and experience in the game often determine one’s position in the rotation. Strategy in competition often is a key to victory.

Each set of balls is biased differently, round in the middle and shaved in various angles. That, plus the “weight of the release (force of the roll),” causes a ball to veer either left or right off a straight roll when the ball slows. Judging the distance at which a player desires the bowl to curve either left or right for maximum placement certainly is part of the game’s sophistication.

Bowls weigh between 2.5 and 3.5 pounds, and one’s hand size determines the diameter of the bowls. Biases range from subtle to severe. Bowls are manufactured in England, Australia or New Zealand. The cost of a new matched set of four starts at $400, and they can be ordered with different grip surfaces, colors, weights, and biases at considerably higher prices.

Some players own multiple sets, each ideal for specific conditions.

Cost of membership at Newport Harbor Lawn Bowling Club is $175 annually (“Only 50 cents a day,” Groothuis points out) for great sport, friendship and recreation.