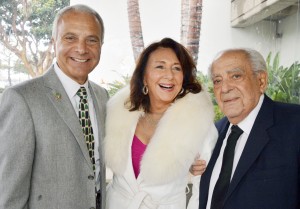 Philanthropists Catherine and James Emmi of Corona del Mar have made a transformational gift to Chapman University to support the university’s significant expansion in the sciences.

The exact amount of the gift is confidential, but it is in excess of $10 million.

The donation was announced by Chapman University President James L. Doti. Ph.D. at the university’s annual “Christmas at the Ritz” event presented on Saturday, December 7, at the Ritz Restaurant in Newport Beach.

The event was hosted by the Women of Chapman support group, of which Catherine Emmi is a member.

President Doti expressed the university’s gratitude by stating, “I can’t think of two people who are more committed to science and education, in all the varied facets of those fields. Jim Emmi’s passion for science and technology, and for engineering, in particular, inspired him to make this gift that will have an impact on so many students. Catherine is an educator through and through, and she understands the vital importance of the sciences in today’s higher education. Together, their vision and generosity will leave a lasting legacy that will benefit so many people – including the citizens of Orange County and the world who will gain from the knowledge and discoveries made by our researchers, students and alumni.”

This gift follows in the steps of other major announcements from Chapman in the past year dedicated to the university’s unprecedented growth in the sciences. The university’s commitment to constructing a new, $130 million Center for Science and Technology on the Chapman campus in Orange, to replace the 1960s-era Hashinger Science Center, was announced in 2012, and a fund-raising campaign has been launched.

Also in 2012, the university purchased two large research-and-development buildings in the Irvine Spectrum area to launch its health science campus, which in November 2013 was named the Harry and Diane Rinker Health Science Campus thanks to a $15 million gift from the Rinkers.

Chapman has also recently announced the development of a new School of Pharmacy and a new physician’s assistant program – both of which are slated to begin admitting students in fall 2014 and which will be housed on the Rinker campus, as will Chapman’s existing physical therapy doctoral program – one of the oldest in the nation.

“In all, with the addition of the Rinker Health Science Campus in Irvine and the new Center for Science and Technology on our Orange campus, we will have added more than 440,000 square feet of new science facilities, quadrupling our present space and investing more than $200 million in the sciences,” said Daniele Struppa, Ph.D., chancellor of Chapman University.  “That gives some sense of how seriously we are taking these steps, and how crucial we believe science is for Chapman and for the careers of our current and future students. Thanks to this visionary gift from the Emmis, we will be able to move forward with confidence as we continue our fund-raising and planning for the future of the sciences at Chapman University.”

James W. Emmi is the retired president of Kimberly Development Company, and a longtime manager of apartment properties in Orange County. He is a member of the Chapman University Board of Trustees. He has served on the Pacific Symphony Board of Trustees since 1990 in various capacities, including as vice president of development and as president. Jim is an avid sailor, having participated in many yacht races over the years. He is a member and has served as a commodore of the Bahia Corinthian Yacht Club in Balboa. He is also a member and has served as treasurer of the Balboa Yacht Club.

In addition to their service on Chapman University boards and committees, the Chapman community is deeply grateful to Catherine and Jim Emmi for their generous support of the Center for Science and Technology Campaign, American Celebration, the College of Performing Arts, Dodge College of Film and Media Arts, the Fund for Excellence and other scholarship initiatives. Chapman University awarded the couple the university’s Citizens of the Year Award in 2012.