I have family in Ingoldstadt. My German heritage hidden inside my genes, I remember walking the streets in that little Bavarian town, unbeknownst to me at the time its literary notoriety.

Mary Shelley conjured up her novel Frankenstein using University of Ingolstadt as Victor Frankenstein’s place for his lurid laboratory; where, as we all know, he constructs a reanimated hideous creature that mauls the nearby villages.

Luckily my family is from Munich and my name doesn’t end in anything stein. But Mary was on to something as current science now replaces hips, knees and failed organs with artificial ones. 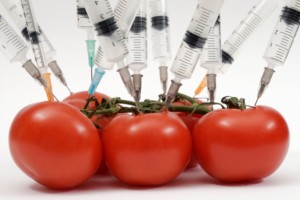 Future science is showing us genetics becoming the modern forefront of a Frankenstein-type novel. Any gene is up for grabs in this genetic roulette as companies cop out oodles of cash for the manipulation of genes. We are just babes in the woods in this arena, in my opinion.

Modern genetic engineering officially started in 1972 with bacteria genes and the subsequent invention of recombinant DNA technology – the splicing of one gene into another. Then Genetically Modified Organisms, or GMOs, arrived on the scene–new combinations of genes and traits not found in nature.

These genetically modified organisms are now part of the foods we eat. I’m not against science or its progress to better our lives; all I ask is leave me out of the guinea pig pen and when the Frankenfoods (thank you Paul Lewis) equal the perfection of Mother Nature, well then (maybe) I’ll embrace it.

For the most part, gene-modified ingredients suddenly appeared between 1997 and 1999 in two-thirds of all US processed foods. Why? A single Supreme Court ruling allowed for the first time the patenting of life forms for commercialization. There are thousands of applications for experimental GM organisms filed with the US Patent Office and many more abroad.

The first commercially grown genetically modified whole food crop was the tomato (called Flavr Savr). It was genetically engineered with a gene from a fish, the winter flounder, for resistance to rotting and released into the market in 1994 without any special labeling.

Today, there is a battle to mandate labeling of GMOs, so far a losing battle, the companies well aware of the negative image that labeling their products GMO would produce.

Yet the growing awareness and public demand has initiated a worldwide obligation of many companies to label their foods non-GMOs (check out: nongmoshoppingguide.com/shopping-guide.html).

Why avoid GMOs? I’ll discuss that in Part II next week. In the meantime, open your eyes when you shop for your food. Though GMOs are pervasive in all products due to cross-pollination, look for these labels that say Non-GMO Project Verified, or Certified Organic where the company is held to strict standards when qualifying for that labeling.