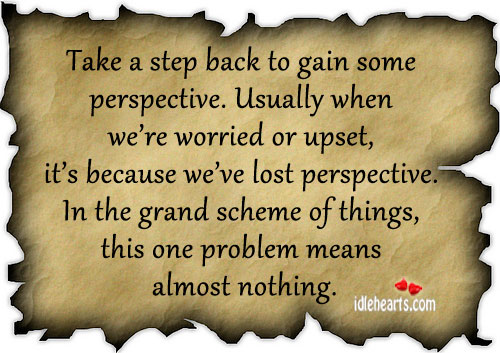 How do you describe what the Grand Scheme is to a child?

Whether you’re teaching your kids that God is calling the shots, karma decides much of what happens, or random chance or destiny impacts our lives more, it’s a parenting milestone when you can start a sentence with “In the grand scheme of things…” and have your child follow the logic.

It’s more than understanding the definition of two words.

Grand is an adjective that has fallen out of favor in everyday conversations with kids. Other than wanting to win a grand prize or visit their grandparents, kids just don’t use the word in sentences like, “We had a grand time at the party.”

But grand is further reaching, more majestic and richer than simply great.

A scheme is basically a plan, but more fun to say and harder to spell. We have to forget that pyramid and Ponzi have been attached to this grand word because when left alone, or with color added to it, the possibilities are endless.

But a grand scheme is more than just two words; it’s an idiom, a way to express an idea that there is far more to life than the day-to-day stumbles and bumps that slow us down.

I think I’ve arrived as a parent in this sense. All four of our kids get the grand scheme idea, but it wasn’t long ago that I couldn’t have pulled that out of my toolbox.

Any mother who has accidently peeled their two year-old’s banana for them knows what I’m talking about. You will get nowhere with, “Hey Junior, get over it, do you know how many bananas you will be peeling in your life? In the grand scheme of things, this isn’t that big of a deal.”

Because when you do something for a two year old they wanted to do themselves, like peel a banana, buckle a car seat, or lift them onto a tricycle, they freak out as though you have personally attacked them.

They have no grand scheme, they only have the here and now and everything that happens in the present moment is grand.

Further, their schemes are borne of impulse, be it drawing on mommy’s shoes or flushing a matchbox car down the toilet or dumping an entire box of cereal on the floor.

When our kids start to handle small disappointments well, we know they are beginning to realize there is more to life, than one lost game, or one broken toy, or not getting the piece of cake with the rose.

Recently, I realized my kids were using my line on me. Have I unleashed a beast?

“Mom, in the grand scheme of things, does it really matter if I miss one day of school to go to Disneyland with my cousins?”

Or, “In the grand scheme of things, one low quiz score isn’t going to matter.”