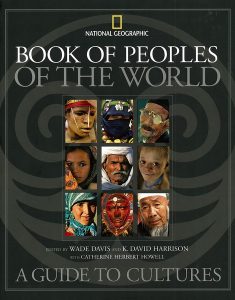 “The world is not dying. It is not falling apart. It’s changing…What young generation has ever come into its own in a world free of peril?”

So says Dr. Wade Davis, renowned anthropologist, National Geographic explorer, and professor, when asked his opinion on the state of our global cultural affairs. This is not to say, however, that Davis does not have grave concerns about the loss of indigenous cultures and languages, as “progress” attempts to force them out of centuries-old ways of life.

Davis, a Harvard educated anthropologist, biologist, and ethnobotanist who has dedicated his life to learning about these cultures, could certainly be regarded as an overachiever. Holding not just one, but three degrees from the fabled university, he has become one of the foremost authorities on the world’s cultures.

As an explorer-in-residence for National Geographic for over a decade, Davis has traveled to virtually all the world’s corners, and lived among no less than fifteen different peoples, in an attempt to showcase the beauty of the world’s diversity.

He has been described as, “a rare combination of scientist, scholar, poet, and passionate defender of all of life’s diversity,” and the Canadian Broadcasting Corporation says, “His work with indigenous cultures has given him a truly unique view of the world. He is able to slip off the map for a while, to live with the voodoo priests in Haiti, the Penan in Borneo, or the Quechuen of Chinchero.”

As you can imagine, all of these unique experiences have created a knowledge base that very few individuals share, making Davis a speaker and writer who remains in high demand. Davis has authored scores of books, including one about the Haitian voodoo tonic that is said to create zombies, which inspired a Wes Craven horror film (Davis did not care for the movie).

He travels the world, speaking on the unique cultures he has experienced, from Vanuatu in Polynesia, to Nunuvut in the high Arctic, to Tibet, and Peru.

He has delivered two highly regarded TED talks, and his profile on the TED website perhaps encapsulates his feelings regarding these ancient and varied ways of life, when it states, “Indigenous cultures are not failed attempts at modernity, let alone failed attempts to be us. They are unique expressions of the human imagination and heart, unique answers to a fundamental question: What does it mean to be human and alive? When asked this question, the peoples of the world respond in 7,000 different voices, and these collectively comprise our human repertoire for dealing with all the challenges that will confront us as a species over the coming centuries.”

Now, he brings this amazing wealth of experience to Newport Beach, as the latest speaker to join the Witte Lecture Series at the Newport Beach Public Library.

Appearing on both Friday, April 7, and Saturday, April 8, Davis will visit the Central Library to share his lecture, entitled, “The Wayfinders: A Life of Adventure in Anthropology as a National Geographic Explorer,” as he discusses this beautiful diversity, found in the tucked away pockets of our planet.

Friday’s engagement begins at 6:30 p.m., with a wine and music reception, followed by a lecture, Q&A, book signing, dessert and coffee. Tickets can be purchased for $50 per person.

On Saturday, the event will begin at 2 p.m., with the lecture and Q&A, and will conclude with a dessert and coffee reception, as well as a book signing. Tickets for Saturday afternoon are $35 each.

Both days offer a $5 discount to foundation members, as well as $20 tickets for teachers and students.

Imagine, then, the transportative powers of his actual spoken word, shared face-to-face in a small setting.

Anyone who has ever marveled at the beauty of our world will not want to miss this rare opportunity to hear about it from one who has actually witnessed its simple grandeur with his own two eyes.

For more information, or to purchase tickets, please visit nbplfoundation.org.