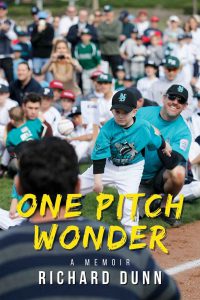 By Cole Cronk | Special to the NB Indy

This is one of the first lines in Newport Beach author Richard Dunn’s new book, “One Pitch Wonder.”

It’s a phrase he comes back to throughout the book as he talks about his long career in baseball. Whether he was pitching in the majors or the minors, confidence is key. But when his son, Julian, was diagnosed with brain cancer, Dunn had to face something he never had on the baseball diamond. Quite frankly, he experienced something that no parent should have to go through. It was, as he says, a real test of how long positivity can keep you going.

Despite the grim premise of Julian’s cancer, Dunn’s book is still full of mirth. Part

autobiography on his baseball career and part memoir for his son, “One Pitch Wonder” does a great job of painting the full picture of Dunn’s life. Although it is a bit choppy as it jumps around Dunn’s complicated career, there is a very universal story of love and grief throughout.

The first and ninth “innings,” which Dunn appropriately replaces for chapters, are full of Julian. Dunn describes him as his angel boy, and by the end of the book I knew what he meant. This child was tough, that much is obvious, but I smiled at the scenes Dunn describes that show Julian’s unstoppable spirit even in the midst of chemotherapy.

Most of the other chapters are focused on Dunn’s career and are chock full of statistics and Dunn’s baseball peers.

My favorite chapter was the one where 11-year-old Dunn describes his baseball ticket con of calling players in their motel rooms and starting fan clubs to get free tickets for him and his best friend. These boyish shenanigans continue as Dunn and his teammates live their lives on the road, getting dinner at gas stations and trying to figure out where to stock up on ice. Another fun side tale was Dunn’s strategic run in with Bill Murray.

Another thing I appreciated about the book was that it ended on an up note. Julian was a patient at CHOC, and now, Julian’s Lego Corner is a part of the hospital that makes sure kids can get new Lego sets to play with. Julian loved Legos his whole life, but interestingly enough, didn’t enjoy baseball until after he was diagnosed.

Dunn states that his son had seven surgeries, 25 MRIs, and two years of chemo before stepping onto the field for his first practice. Like I said, this kid was tough.

Overall, Dunn has done a phenomenal job recounting the two loves of his life; baseball and his son. For baseball fans, this is a must read. But even if baseball isn’t interesting to you, this is a story about a man who learned some very important lessons on a long and difficult journey.

My favorite lesson, the one that Julian taught his father, is that laughter is the most important medicine.

“One Pitch Wonder” is available on Amazon.com.