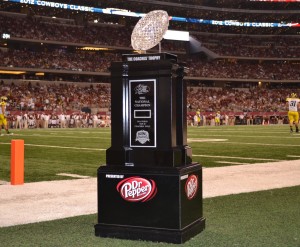 Scoring a game changing touchdown for the winter season tourism, Newport Beach is the host city for the 2014 Bowl Championship Series.

Newport Beach is serving as home base for both teams, plus their families, coaching staff, fans, VIP delegates, alumni groups, band members, and national sports media.

The city will grow by about 10,000 people for the week, generating an estimated $3.2 million in revenue, said Tom Johnson, chairman of the board of directors for Newport Beach & Company.

“Should be a great week for Newport Beach to show their stuff,” Johnson said. “What could be better to kick off January?”

The game, between Auburn and Florida State, will be played at the Rose Bowl in Pasadena on Jan. 6.

The guests began arriving on Monday and have been trickling in throughout the week. Most will be staying until Tuesday.

“There will be stream of visitors similar to summer, during this notoriously slow week,” according to the Newport Beach & Co. website.

“Hopefully, they’ll fill our restaurants and shop at our local retailers,” Johnson added.

“Having the Auburn and Florida State teams and fans in town is a tremendous boost for our hotels, restaurants, stores, support services at a time when they are usually seeing a post-holiday slowing,” said city spokeswoman, Tara Finnigan.

That, in turn, also produces sales tax and TOT which help the community, she explained.

The Newport Beach Marriott Hotel & Spa is hosting national media. Reporting from Newport Beach, the stories should garner quite a bit of attention for the city from around the country.

An estimated 4600 overall room nights, including the Westin in Costa Mesa, are booked up to accommodate the visitors.

The Newport Beach Police Department has no plans to increase patrols, does not expect an increase in crime and do not anticipate any major effects to traffic, said NBPD spokeswoman Jennifer Manzella. Although commute times are always a little more unpredictable around the holidays, she added.

“The police department will deliver the same high level of service that our community has come to expect from us,” Manzella said. “Residents should see no change in service levels or response times.”

Members of the department will be also assisting with media hospitality, and members of the Department’s Volunteers in Policing program will act as ambassadors at John Wayne Airport, welcoming those traveling to Newport Beach for the BCS game.

“The city has many venues and services to offer these visitors, and we hope that they will enjoy a fun, safe, and memorable trip to Southern California,” Manzella said.

The city’s official marketing organization, Visit Newport Beach Inc., has been hard at work preparing for the weeklong event.

“Though the effort to even be chosen as the host city was extensive, that was just the beginning,” Finnigan said. “Since that time, VNB has worked closely with the BCS staff and led a committee of Newport Beach tourism officials – Lt. Jon Lewis from the NBPD and I got to be a part of the committee too – to work on the logistics and plan the related activities.”

Newport Beach being selected is a direct reflection of a lot of time and effort put forth by Kliem, Sherwin and the staff of Visit Newport Beach, she added.

The experience will hopefully gain some new lifelong visitors and the city will see members of this delegation bring their friends and family to Newport Beach again and again, Newport Beach & Co. wrote on their website.

“We hope they have a great time in Newport Beach and return to visit again someday,” Finnigan agreed.

A variety of activities are planned for the visitors, including a “Beef Bowl” at the Back Bay Bistro between the two teams sponsored by Lawry’s, where the teams will compete in an “eat off,” Johnson explained.

“There should be great excitement around town, with plenty of Auburn and Florida St. t-shirts,” Johnson said. “Expect the bands to show up around town to show their stuff.”

Nick O’Leary plays tight end for Florida State. His grandfather is Jack Nicklaus. So locals should keep an eye out for a sighting of the legendary golfer, Johnson added.

“From the city’s perspective, we’re really honored that the BCS has again selected Newport Beach as the city where the BCS teams, their marching bands, alumnae and fans are based while they are in Southern California,” Finnigan said.

The event turned out to be a huge success and the biggest week for tourism in the city’s history, according to a press release about the 2010 experience.

“We are looking forward to welcoming the BCS delegation once more to experience the distinctive charms of Newport Beach,” said Gary Sherwin, president & CEO of Visit Newport Beach Inc. “We want to ensure that all visitors can fully embrace the warm, quintessential spirit of our picturesque destination.”