Newport Beach resident Sandra Sellani and her sister Susan Sellani have written a book called, “The 40-Year Old Vegan: 75 Recipes to make You Leaner, Cleaner, and Greener in the Second Half of Life.”

It’s a book for those willing to look within and ask questions about their diet, the ethics behind their choices and how it affects health.

Each page announces a reason and a way to gradually and enjoyably eat better and live healthier by choosing to switch eating habits.

I think both sisters, besides being fraternal twins, complement each other well with their knowledge and love for animals and food.

Sandra is a vegan and Susan an omnivore and both learned to cook early on in their lives growing up. The combination of their diets and understanding of acquired tastes and habits has given the sisters the ability to create delicious and easy (yes!) recipes, along with a weekly meal plan to help gradually transition over a year into eating better with plant-based foods.

Visit their website 40YOV.com for more details on the book and links to purchase a copy.

Last month I spoke to both sisters, who provided insights to their book and reasons why it is good to lean into a vegan diet.

Sandra:  One of the most compelling reasons we have for eating vegan is it reduces, eliminates or even reverses disease. It is well documented that meat eaters have a greater risk for heart disease as they get to middle age. But let’s step back a bit even before the meat is eaten. Butchers and those in the meat handling trade are infected routinely with strains of HPV (Human Papillomavirus) and studies show their wives are at higher risk for cervical cancer. Then there are myriad other reasons such as the horrid conditions of animals raised for consumption and the way they are slaughtered. The whole process is deplorable to animals and human health; the atrocities are heartbreaking. I went vegan for animal rights. It isn’t even in our human reference to understand what actually goes on in factory farms and slaughterhouses. And it’s all out of public sight, therefore out of mind. But it ends up in our body after ingesting animals injected with antibiotics. Factory farm animals are raised in close proximity to each other, live in their own fecal matter. Meat before its packaged is injected with color to make it look fresh. Chicken is injected with salt for added weight. It’s all such a façade, so much deception involved. 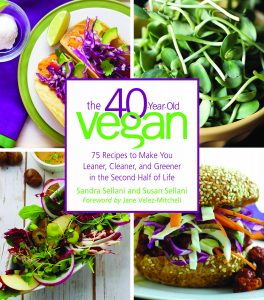 Q:  How ethical are small farms’ grass-raised beef and dairy?

Sandra: Again, it goes back to our belief system. A lot of small farms say, the animals on they raise have only one bad day, the day they are slaughtered. So I think, I’m good to my Labrador every day until the day I send him off to be killed. Why is it ok to kill a cow and pig, but not a Labrador? It’s because of our belief system. We need to open our circle of compassion for all animals and people. So many children these days are very aware and can’t seem to wrap their heads around eating the same animals for dinner that they just met at the petting zoo. A big generational shift is happening and moving towards vegetarianism and veganism. We believe animal welfare is so important that 10 percent of our proceeds go to Mercy for Animals: mercyforanimals.org.

Q:  What about getting enough protein?

Susan:  Unfortunately there is misinformation out there about nutritional needs when eating a plant-based diet. One big contention is getting enough protein. Everything we learned about protein was sold to us by the meat and dairy industry, the very same groups that initially constructed the food pyramid. Americans eat too much protein which is a strain on the kidneys. And animal protein is linked to so many types of diseases. In the book, “The China Study,” it showed when protein was added to cancer cells, the cancer cells actually grew. But that wasn’t the case with plant protein. I think the protein myth is something people hang on to due to misinformation that continues to circulate. People need to understand protein is in everything. You can get all you need in a plant based diet. 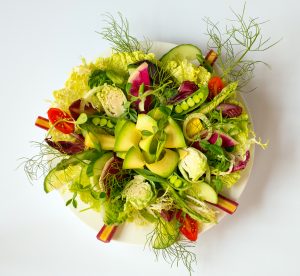 Q:  How does one step into becoming vegan?

Susan:  We are creatures of habit. For me I loved burgers. But when I realized it really wasn’t the meat that made me like it, it was the toppings – the pickles, tomatoes, lettuce, avocado – I decided to switch it up to plant-based garden burgers and have been happy ever since. Nowadays, they are doing so much more with non-meat products’ texture and taste it’s hard to tell the difference. So much so that many vegetarians don’t even like them. They taste and feel like eating the real thing. A great place to start is with a veggie burger. One leads to another and you’ll be more willing to try the next thing.

Q:  Are some of the recipes in your book based on your childhood?

Sandra: We grew up in a traditional Italian family where meat was not the focus due to both cultural and economic reasons. We were the first generation here and grew up like most immigrant families eating lots of vegetables, pasta, bean soups. Eating meat was not an everyday thing. We laugh about panzanelli and its popularity. It is a poor man’s food to my parents, combining leftovers since we never threw food away. We enjoyed panzanelli our entire lives. The thing about Italian cooking is it’s an expression of the tradition, culture and love we grew up in. It was a time when TV wasn’t turned on and we ate dinner at the table when my father came home. Some of the recipes included in the book didn’t have to be modified much because it was already vegan in its original form. People need to understand eating plant-based is worth looking into for the very fact of living a healthier life, for both people and animals.