April 2 is National Burrito Day, and a handful of Newport Beach restaurants are ready to serve you a delicious rolled breakfast, lunch or dinner entrées featuring tortillas filled with everything from eggs and bacon to fish and steak.

Need some suggestions? Here’s a short list of Mexican-themed restaurants in Newport Beach open for take-out and delivery.

Avilas El Ranchito in Corona del Mar and the Balboa Peninsula both have several tasty burritos listed on their menus, from a basic bean and cheese burrito to the substantial Azteca Burrito with shredded chicken or beef with beans, smothered with salsa ranchera, melted cheese and guacamole. Visit avilaselranchito.com.

Great Mex Grill in Balboa Village has been serving its signature cuisine to locals for several decades, and for good reason: quality food at reasonable prices in a fun atmosphere. My go-to menu item is the shrimp taco, but I have to admit their burritos are pretty awesome too, starting with the breakfast burritos. You can get basic egg and cheese burritos or ones loaded with ham, sausage or chorizo. They even have a Slim Burrito with egg whites, spinach, mushrooms and avocado. For lunch or dinner, I usually go with a grilled shrimp burrito, but you can’t go wrong with any of them. Visit GreatMexGrill.com.

SOL Cocina on Coast Highway has several burritos on their menu, including carne asada, grilled chicken, and carnitas. You can also order their terrific signature margaritas to go! Visit SOLCocina.com.

Wahoo’s Fish Tacos are open for take-out and delivery, including the location in the Fashion Island food court. Wahoo’s has a fun list of burritos, including an Outer Reef burrito, Citrus Slaw burrito, and the ever-popular Mr. Lee’s Scream’n Chicken burrito with spicy chicken, rice, mushrooms, cheese, green sauce and the famous Mr. Lee’s Spicy Chili Sauce. You can also get any burrito made wet (topped with cheese and either enchilada or green sauce). Visit Wahoos.com. 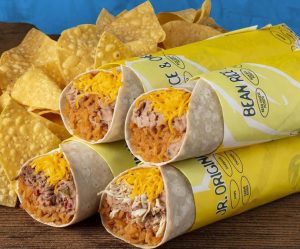 I’ll be making the drive to Miguel’s Jr. on 17th Street in Costa Mesa (just a few blocks from the Newport border) for my favorite burrito: The Original with shredded chicken—or maybe the Garbage Burrito with shredded chicken, refried beans, spanish rice, cheddar cheese, lettuce, tomatoes, creamy guacamole, and sour cream. Special deal for National Burrito Day: Miguel Jr’s bean and cheese burrito and the bean, rice and cheese burrito – normally $3.69 to $3.99 – are on sale today only for $1.99. Visit MiguelsJr.com.