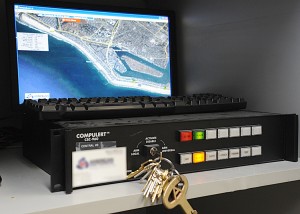 Locked behind a steel door that requires a special key to open, which the Watch Commander at Newport Beach Police Department carries, is a single white button with the ominous word “Tsunami” etched on its face.

A push of that button activates the three emergency warning sirens perched atop telephone pole-high pylons spaced along the oceanfront of the Balboa peninsula.

When the sirens wail at full volume, virtually every resident of Newport Beach will be able to hear the warning that a possible tsunami will strike our shores within a very short time, said Police Chief Jay Johnson, who along with the fire chief sits atop the city’s Emergency Management Command.

The moment that button is depressed, a well-defined, well-rehearsed, life-saving action plan involving all first responders is immediately activated.

The decision to push that button most likely depends on information e-mailed or broadcast broadly by the West Coast/Alaska Tsunami Warning Center at Palmer, AK.

Of course, an earthquake-generated tsunami occurring thousands of miles away might not arrive for up to six hours (even traveling at a speed of up to 500 miles per hour), hopefully allowing for an orderly evacuation from sea level zones.

A locally originated tsunami spawned off either Palos Verdes, or Catalina Island, will allow virtually no time for orderly escape from a wave.

The sirens will blast immediately at the discretion of the Watch Commander, and will continue to wail until he turns them off.

But the sirens are not the only mode of notification.

Additionally, the Huntington Beach Police Department will assign one of its helicopters to broadcast warnings to threatened areas via loud speakers. Although Newport no 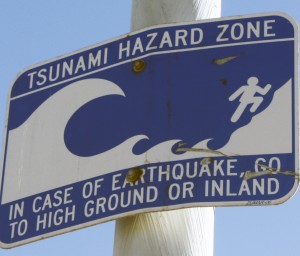 longer operates its own whirlybirds, the city has a contract with Huntington Beach, to dedicate one of its helos to notification duty.

Four levels of tsunami notifications have been defined by the West Coast/Alaska Tsunami Warning Center:

“The biggest issues for us is notification and evacuation,” Chief Johnson emphasized.    Should evacuation be necessary, all lanes on all roads along the evacuation routes become “one way.”

The main exit roads are Superior, Dover, Jamboree, Avocado, MacArthur and Newport Coast.  Because of the outgoing flood of evacuees, police officers and fire personnel responding from outside the city to activation calls are aware of probable uncongested ingress routes.

Additionally, boat owners, given enough time, have the option to move their yachts out to sea to at least the 100-fathom line – the depth at which there is little danger of tidal wave action.

Tsunamis may not be the only genesis of unusual and dangerous waves. Storm generated swells or extreme storms in tandem with high tides may cause flooding of oceanfront properties, and dock and boat damage, as well as accelerated erosion. These events also may be reason to sound the sirens.

Fortunately, because of California’s sharp east-west direction angling off Point Conception in Central California, Newport Beach most likely is shielded from the devastating onslaughts of earthquake-caused tsunamis, whose inexorable waves can sweep ashore at heights up to 50 feet, destroying virtually everything standing or running before them up to several miles inland.

But we live in a world of “could and maybes.” A locally generated tsunami assault of Newport Beach (and the surrounding coastal cities) could produce a wave of between five and 10 feet that “could maybe” juggernaut across all our beaches, then wash over Newport’s waterfront and island homes and businesses.

A high tide could exacerbate the inundation.

If this were to happen when 100,000 beachgoers are enjoying the sun and surf on a typical summer day, they may have less than 15 minutes to get their legs in sprint mode to reach the highest nearby building or hill.

Headline writers would be hard-pressed to capture the unfathomable losses.

Frightening as that may sound, just imagine resting comfortably at anchor in the protected inlet of Lituya Bay, Alaska, in 1958, when a localized submarine quake launched an estimated 100-foot-high tidal wave through the bay’s narrow inlet with such force that the water completely scoured an evergreen forest clinging to the encircling cliffs up to a height 1,720 feet.

Two of the three fishing boats anchored there and their crews miraculously survived the indescribable turbulence in both directions.

According to Cal Tech’s Dr. Kate Hutton (frequently seen being interviewed on TV news programs), “It takes a significant raising or lowering of the ocean floor to cause a tsunami. A possible exception would be a quake that triggered a subsea landslide, which could cause a tsunami.”

Such a landslide zone exists off Palos Verdes, and Long Beach, and it could cause “the most troubling kind of tsunami,” opined Katie Eing, disaster preparedness coordinator for Newport Beach. It would be upon Newport’s shores in minutes.

Dr. Hutton said, “We haven’t seen an offshore tsunami in Southern California since historic times, but our written history is very short from a geologist’s point of view. It could still happen and probably will someday.”

In the 2002, the 33-page “Evaluation of Tsunami Risk to Southern California Coastal Cities” report, funded by FEMA and administered by the Earthquake Engineering Research Institute, noted that “…the deeper water and greater size of (a region called) the Santa Catalina uplift imply that large earthquakes on the Catalina fault would move larger volumes of sea water for greater distances than would large earthquakes along the Palos Verde fault zone.”

Even though Newport has not experienced significant wave effects from recent seismic upheavals – such as that most televised mega-tsunami that virtually eradicated Fukushima, Japan, taking upwards of 16,000 lives – the city is preparing for “worse case scenarios,” Eing said.

“In the last 10 years, we’ve had four tsunami warnings,” said Eing. Despite the fact that some critics believe Newport is safe from catastrophic tsunamis, Eing said the city focuses on such possibilities because, “We want to save lives.”

In such projections, “50,000 residents would have to evacuate.” If time and conditions permit.

Another less talked about seismic result is something called a seiche, which is caused by passing seismic waves.

“This is usually on a much smaller scale than a tsunami,” Hutton explained, “but it still might cause damage to boats or marina facilities.”

There are more than 10,000 yachts of all sizes docked or moored in Newport Harbor.

A 2002 study by quake researchers stated, “…a large earthquake could create a huge tsunami in Southern California, in timescales of 2,000-5,000 years. When local fault ruptures are factored in, occurrence interval is on the order of 300-500 years.”

The city offers basic, albeit significant tsunami survival advice on its website.

“I want the public to know that time is of the essence; it’s critical to pay attention to what officers say and what they tell you to do,” Chief Johnson said. By not obeying commands, nonresponsive citizens will “put my people – and others — at risk.”

Authorities all agree that the best defense against the inevitability of tsunami is education.   Learn all you can about this great force. The Boy Scout motto says it best: Be Prepared.  And the United States Coast Guard adage, Semper Paratus, bolsters that: Always Ready.