This is one father who’s truly unhappy having put two kids through college.

No, not my own children. My orthopedist’s.

In a long life of body-risking sports, I’ve broken bones, worn out cartilage, sprained muscle, strained ligaments and have sported bruises whose various colors all can be found in a box of crayons.

Now that I’m in my 70s and (debatably) wiser, I’ve discovered a couple of activities that will preserve what’s left of my anatomical integrity, yet work all of my connective tissues without injury. Both are Asian in origin: Tai Chi and Longevity Stick. Both are offered through Oasis Senior center, as well as privately.

In our flurried world, where speed and strength are the popular measures of athletic prowess, both Tai Chi and Longevity Stick encourage you to hurry up to slow down. 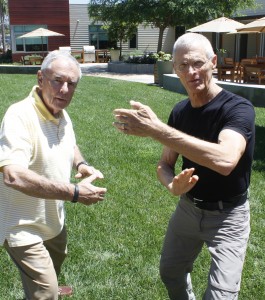 “The slower one performs, the better the results,” shared Shanghai-born Tai Chi master Bing Luh, who for the past 20 years has taught thousands of students from Newport to Los Angeles.

Luh explained that the purpose of Tai Chi is to “learn to relax your mind while focusing on your body as you do exercise through managed stretching and gentle movement.”

Luh couples movement with breathing exercises called Chi Gong. Ideal for people of all ages, it is mostly seniors who gravitate to the gentle benefits of the sport.

Ultimately, Luh said, a practitioner will reduce physical movement to a “barely moving state, while mentally directing and increasing his internal energy (chi).”

This, of course, does not happen overnight. For most, it takes up to six unrushed and unpressured months to learn the 24 steps of the basic Yang-style form, Luh said. But managing one’s energy flow is a lifelong endeavor.

Roger Otte of Newport Beach has bene practicing Tai Chi for seven years. He chose not to learn the forms, but to accelerate the process of controlled breathing and “moving chi” throughout his body – especially to the areas around his implanted hips and knees.

Before his surgeries, “My pain didn’t allow me to fully realize the benefits of Tai Chi,” Otte recounted. But after surgery, with pain diminished and balance restored, he focused exclusively on the intellectual management of energy within his body.   Instead of performing the forms, 78-year-old Otte blends the movement of chi while using the exercise equipment in the Oasis gym at least two times a week.

“Harnessing chi takes regular practice,” Otte said, “but its movement has a positive effect on a person – resulting in higher energy, greater mobility and improved balance.”

His sentiments are reflected by millions of Tai Chi practitioners across the globe.

Longtime Newport resident Jean Goff could virtually see the exclamation points behind her physician’s firm admonition. That was the only encouragement the former tennis player, skier, hiker, and Pilates practitioner needed before enrolling in Tai Chi at Oasis.

Steeped in traditional Western thought, Goff said, “Never would I have believed that this Eastern practice would work, or that I’d enjoy the benefits that I have.”

She takes Chen style Tai Chi classes once a week from Oasis instructor Diana Wong, but, she says, “During the week, I sit and move energy throughout my body.

“People have told me that they can feel the energy I give off when they hold out their hands,” said the retired teacher.

The ability to transmit energy is a sign of relaxation (tenseness and stiffness both prevent energy flow).”

Prior to starting Tai Chi, Goff could barely stand on one leg, she said. Today, it would be a close contest between a flamingo and herself.

Although uttered by President Teddy Roosevelt prior to his presidency, his famous words “Speak softly, but carry a big stick” fit perfectly with the regimen of the Longevity Stick: a slow, 12-movement bending and 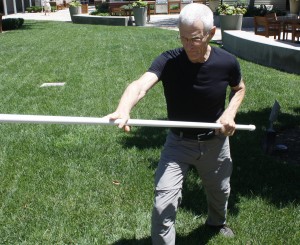 The easy-to-learn movements have proved so popular that the exercise has gained widespread international participation. In contrast, Tai Chi in its variety of forms has been practiced since the 1600s and tens of millions of people globally make it part of their daily lives.

Molly Fawcett, 82, teaches Longevity Stick on Tuesday mornings at Oasis. She’s as limber as the proverbial reed in the wind, her voice as soft as a zephyr as she guides her students through the non-stressful routine. Students range in age from 50s to 92.

“Sometimes I have one student, other times 14 will show up,” Fawcett said. Her grandkids watch her exercise and call her a “pole dancer.” 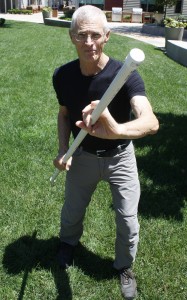 Longevity stick “helps seniors to stand up straight and to increase flexibility,” Fawcett explained, adding that “others recuperating from strokes or shoulder surgery find that it helps their mobility.”

Student Maureen Boyle, who gives her age as “old enough to be interested in the longevity stick,” has been studying the exercise once a week for eight years, always at Oasis. When she travels, she says she’ll either find a way to stick her stick in the car, or “I’ll always find a broom somewhere.”

The Longevity Stick “is a very important part of my life; and every minute doing the exercise is worth it,” Boyle enthused.