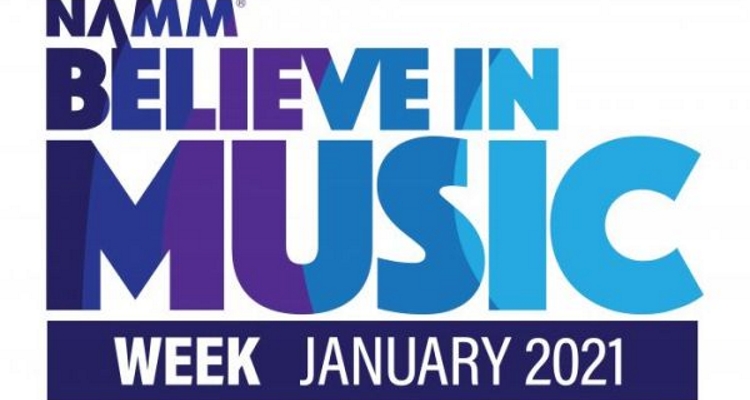 Performances by the Go-Go’s and Cherie Currie? A look at Gibson Guitar’s Coachella house complete with a guitar-shaped pool? Exclusive interviews with Jackson Browne, Mel Brooks, and Peter Frampton?

It could only mean one thing: The National Association of Music Merchants (NAMM) and their virtual take on the traditional convention (held in Anaheim every January) with their Believe in Music Week.

This free Believe in Music Week 2021 boasted an attendance of over 90,000. Industry professionals and music lovers alike gathered via the glow of their computer screens to celebrate music, watch exclusive interviews, and get insights to the industry and instruments that make it all possible.

NAMM’s famous event, the She Rocks Awards, took place digitally on Friday, January 22. The event shines the spotlight on women in the industry and the influential progress they’ve made on music history.

Opening with a soulful performance of “Ride” by Magnolia Boulevard and Lzzy Hale’s electric performance of “Rock Show,” the night included inspiring live sets by Cherie Curie with Suzie Quatro and Nick Gilder, Evanescence, the Go-Go’s, and Nancy Wilson. The comradery of getting through the year set the tone for uplifting messages of unity and a sense of purpose that colored the night.

Nancy Wilson received the Legend Award, The Go-Go’s received the Icon Award, and Cherie Curie received the Ground Breaker Award. Alicia Key’s recording engineer, Ann Mincelli received the Mad Skills Award. It was unique and heartfelt to watch women courageous enough in roles both behind the scenes and on stage to make a difference and push progress in the industry.

Women lifting up other women and celebrating their accomplishments in a festive and supportive environment needs to be normalized and encouraged, and the She Rocks Awards is certainly a pioneer in doing so.

To replicate the feeling of engagements and connection, NAAM made use of chatrooms in each event and a livestream from Believe in Music Week TV. For their global livestream, artists from around the world, from Singapore to Germany performed sets. Throughout the week, NAAM’s livestream featured performances and conversations with artists and industry heads.

A live comments section was featured to the right of the screen to allow attendees to interact, along with a section for questions and polls. Attendees swapped their favorite recordings and album recommendations.

First in the day was Woodstock performer and friend of the Beatles, Ravi Shankar. Shankar’s interview revealed touching stories about George Harrison and the spirituality that can be found in music.

Following next was an interview with Sun Record’s Scotty Moore who shared anecdotes of recording with Elvis Presley. Though these interviews were pre-recorded, the live chat still made the audience feel included.

Roger McGuinn of the Byrds discussed his passion for music and highlights of his 1960’s career. One such highlight was him sending Pete Seeger a letter and Seeger taking the time to write a letter of accolades back. Another was McGuinn’s time playing with John Denver on tour, saying “Dylan’s people tried to steal me, but I stayed with John Denver.” He then finger-picked his way through the opening chords of “Turn, Turn, Turn” on camera and discussed his time played banjo and his beloved Rickenbacker guitar.

Interestingly, Oral History Spotlight tackled “The European Music Industry between East and West Germany.” This unique program covered how the makers of instruments in Europe were affected by the turmoil of war until reunification. The Music History Project Podcast took on the topic of the British Invasion, interviewing figures such as Peter Asher, from the duo of Peter and Gordon. Asher and his sister, Jane, were close companions of Paul McCartney in the ‘60s. In true Covid-era fashion, the week ended with a Zoom meeting “Oral History Cocktail Hour” that was a pleasure to attended.

Instrument makers and behemoths of the industry such as Vox, Gibson, and Martin Strings Guitars, captured musicians with informative “how-to” videos and exclusive looks at emerging products.

Martin Strings Guitar’s Product Director took the time to do a live chat Q&A on Tuesday. VOX gave an overview of their iconic drumkit with the Kinks drummer Bob Henrit, along with an intimate discussion with Peter Frampton on his favorite amps.

Ed Sheeran’s Production Manager and Engineer, Chris Marsh, discussed his time on the famous ÷ (“Divide”) Tour. Using Meyer Sound system, he was able to bring incredible live sound to every continent. Marsh went into detail about life on the road with Ed Sheeran, his preferred audio solutions, and all thing live sound.

Gibson TV took the audience on a tour of their Coachella house (complete with a guitar shaped pool) and gave exclusive interview clips. Marshall amplifier gave a behind-the-scenes look at their factories and craftmanship.

On Wednesday, NAAM took us through a virtual tour of their Making Music Museum in Carlsbad, California. On Thursday, session videos took the spotlight. “Global Touring in the New Reality” discussed what it will be like when live shows re-emerge. Bringing together top minds from the industry, the session examined obstacles and opportunities for growth in this new era.

Mel Brooks went over the music for his momentous musicals “The Producers” and “Young Frankenstein.” Deadmau5 answered questions on music mixing. Informative and timely sessions on TIKTOK’s audio algorithm and mastering sound on Zoom podcasts were provided. Cherie Currie wrapped up the night with a 30-minute retrospective on her legendary career with the Runaways.

Despite taking the convention online, NAAM’s Believe in Music Week exceeded expectations and provided a superb example of a digital event done well.

With messaging features and connection requests, meeting and conversing with fellow music aficionados was still possible.

NAAM’s Believe in Music Week 2021 was an informative, well-curated, and exciting event that did what NAMM does best: bring people together to celebrate the ever-changing world of music and its products.