Ron Salisbury owns The Cannery Restaurant in Newport Beach as well as the Corona del Mar location of El Cholo, among others.

These culinary legends have launched a new project together: Louie’s by the Bay, an Italian steak house that opened in February where The Ritz Seafood – which closed after only 17 months in business – once stood on Coast Highway in Newport Beach.

The Ritz Seafood borrowed the Ritz name from the former Fashion Island fine dining restaurant once owned by the late Hans Prager, a well-known figure in a culinary world who was friends with both Salisbury and Selvaggio.

“One day Hans said to me ‘I am going to introduce you to a guy that has a bigger ego than I have.’ Ron and I met and became friends, When I moved down here, we became better friends, and now partners,” explained Salisbury when I had dinner there recently with two fellow Firebrand food writers.

Selvaggio, 72, owned the Santa Monica Valentino and several others. He also had an enviable wine list that numbered more than 100,000 bottles.

Three years ago, Selvaggio and his then-wife moved from L.A. to Orange County, which meant Selvaggio had to make that painful daily commute to Santa Monica.

Then Salisbury told him The Ritz Seafood restaurant was available and the landlord would give them a good offer to take it over. So they did.

They gutted the restaurant and came up with a new design that is much warmer and inviting than the old restaurant.

Of course, it helps when Selvaggio himself is there to greet you and welcome you into his home-away-from-home. He is a charming host, floating from table to table to check on his guests and share a laugh or a story.

Selvaggio had his chef, Antonio Orlando, bring a round of appetizers to our table.

Turns out Selvaggio’s choice for chef was serendipitous. Orlando was one of Selvaggio’s chefs at Valentino who left after 10 years to open his own successful series of restaurants. He retired several months ago but heard that Selvaggio was interviewing chefs for his new restaurant. He called Selvaggio, said he lived local and was interested. Selvaggio snapped him up without thinking.

The flavors of the buratta and prosciutto melded perfectly, and the crispy gnocco fritto added texture. The colorful crudo plate was an artistic masterpiece, and the fish practically melted in my mouth.

Next, Chef Orlando brought out a sample plate of two signature pastas: a house special of ravioli with ricotta and buratta in a tomato sauce, and mandilli ($23), or handkerchief pasta, with layers of lasagna noodles dipped in a creamy pesto sauce.

The sample made me want more, but beef was on the way in the form of osso buco with risotto ($52), a hearty yet tender entrée.

Dessert was canoli, and a trio of tiramisu—lemon, pistachio and traditional.

And what about the restaurant’s name? 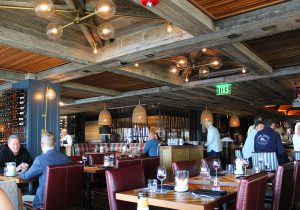 “Ron is a sentimental guy,” explained Selvaggio. “There are two shadows over this restaurant. One is Hans Prager. The other is Louie Zamperini, a famous Olympic runner.”

Zamperini was an Olympic distance runner in the 1936 Berlin Olympics who later served as a B-24 bombardier during WWII. Zamperini’s plane crashed in the ocean, and after drifting at sea for more than a month landed on the Japanese occupied Marshall Islands and was captured. He was taken to a prison camp in Japan where he was tortured. Following the war he became a Christian Evangelist and devoted himself to at-risk youth.

Zamperini became friends with the Salisbury family before the war and ended up being Ron’s baby sitter. Zamperini died in 2014, and Salisbury wanted to honor him by naming the restaurant Louie’s.