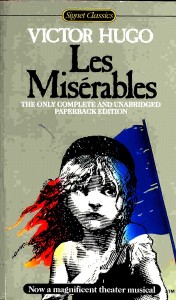 Growing up, my family wasn’t exactly what you’d call theatergoers. Our idea of theater was the kind where you could get a bucket of popcorn and watch a double feature.

Later on, however, my mother began a love affair with “The Phantom of the Opera” that launched us down a new entertainment path, and kick-started my appreciation for musical theater.

On Christmas Day, I was able to celebrate all my theater roots, as my family and I watched the new film adaptation of what is in my opinion one of the best stage musicals of all time: “Les Miserables.”

As we waited for the movie to start, I admit to being a little nervous. While the previews I had seen looked pretty amazing, I had heard mixed reviews on the singing. Would these actors do justice to the songs I loved so much? Would they still speak to my soul when sung from the screen as they did when sung from the stage?

The answer was a resounding yes! I just can’t help but be drawn in by the raw beauty of this music. It speaks to the most basic of human emotions – motherly love, a desire to be better (both as people and as a society), and of our obligation to help those around us.  Above all, it is the triumph of love and the human spirit.

If you are in doubt as to the power of this music to stir the soul, just ask my son’s friend, Payton. He told me after the close of the movie that during the finale, they were watching me sob instead of watching the movie. If you know me personally, you know this is no exaggeration.

And for all the tears I have shed to this music – in a theater (both kinds!), my car, the shower – I know I would never be able to appreciate the music so much if I didn’t know the whole story from reading Victor Hugo’s masterpiece of a book, on which the musical is based.

Many years ago, I asked one of the attorneys in the firm I worked for to give me a book recommendation. He did me one better, and brought me his personal copy of the unabridged English translation of “Les Miserables,” complete with notes in the margin and highlighted passages.

It was in these pages that I learned Fantine’s story. It didn’t begin in a factory, but as a beautiful young girl, caught up in the wonder of first love, then buried in the desolation of that love lost. It told of how she made the heartbreaking choice to leave her young daughter to be raised by strangers, believing she was giving her a better life.

It was a story rich with emotion that cannot be encapsulated entirely in a couple lines of a song. It was in these pages that I grew to respect the uncompromising values of Jean Valjean, a man who, while flawed, strove to live a life worthy of the trust that had been placed in him.

The first time I saw the stage production, I spent the first half furtively whispering in my then fiance’s ear all the background information I felt he needed to know in order to truly understand and enjoy the story the way I did.

Widely regarded as one of the most influential novels of the nineteenth century, the book stirred my soul even before the musical did. It laid a foundation for all the versions that would follow. It allowed me to fall in love with the story all over again, as told through beautiful music.

Definitely, see the movie, but if you want to truly feel the story, and hear its whole message, make sure to check out the original as well.