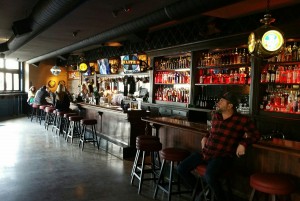 The District Lounge near the Newport Pier served its final cocktail last month, but don’t worry—the historic watering hole that dates back more than a century has been revamped and renamed The Stag Bar, it’s original name.

“We are extremely excited to celebrate the return of the Stag,” said owner Mario Marovic. “Much of the community remembers the bar fondly as the Stag as it had been known for generations. It was time to bring it back and properly recognize its incredible history, along with a complete revitalization for many more generations to enjoy.”

While initially serving whiskey to guests behind a counter on the first floor of the Stag Hotel, built in 1908, Marovic said the Stag Bar officially opened its doors as a full bar in 1914. 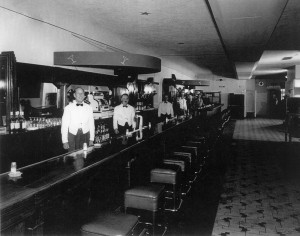 The Balboa Peninsula was known at that time for its rowdy reputation (Judge Robert Gardner even wrote a book entitled “Bawdy Balboa”), including gambling and, during prohibition in the 1920s, rum-running and speakeasies. The Stag was part of that action. During prohibition the name was changed to the Stag Café. Beer was supposedly brewed and sold upstairs, while sarsaparilla was served downstairs.

And according to legend, the hotel rooms above the bar at one point served as a brothel.

Following the end of prohibition in the early 1930s, The Stag was remodeled and became a martini bar. Taxidermy, gun racks and spittoons were replaced with upscale fixtures. The bar, already one of the longest around, was extended to nearly 100 feet in length, making it the longest bar the city. This is the same bar you can order a drink from today.

Over the years, The Stag remained a popular hangout. The name changed to The District Lounge in 2006, but to mark its centennial in 2014, the bar underwent a complete restoration and expansion.

“We were going to rehab the building for earthquake retrofitting, so we said let’s go all the way and do a rehab on the entire property and go back to what it was originally,” explained Marovic. “People know The Stag Bar from the 1990s, the 80s, even the 50s. Everyone has a different memory. We went back to old school Stag

Bar, the art deco era when the bar was built.”

According to Marovic, The Stag Bar added larger bathrooms, a full kitchen, and banquette seating overlooking the boardwalk.

The bar has been rechristened Stag Bar + Kitchen, and as of January 1 is serving a menu that features specialty pizzas, meatball sliders, wings and seasonal salads.

That’s quite different from the old days when hungry patrons accessed an adjoining Chinese restaurant via a red vinyl-covered door in then wall near the bar.

During the remodel, Marovic said they uncovered signs that date back to the early days—those signs are now on display at The Stag Bar.

One thing about The Stag Bar that has changed, said Marovic, is the “informed and educated customer base. It’s not like the old days, so we try to give them more than they expected.”