Something fishy is going on at South Coast Repertory, but that’s a good thing!

On view through Feb. 19 on SCR.s large Segerstrom stage is an adaptation of the classic novel “Moby Dick,” courtesy of Lookingglass Theatre Company.

We caught a performance of Moby Dick last week, and as usual decided to have dinner at a nearby restaurant before seeing the show.

To keep with the seagoing theme of “Moby Dick,” we opted to dine at Water Grill, which opened last year at the base of the South Coast Plaza bridge over Bristol Street where Scott’s Seafood once stood.

We had checked out Water Grill after they opened and enjoyed appetizers and drinks, but looked forward to returning for dinner.

It was a busy Thursday night but luckily we had made reservations and were ushered straight to our table. Our knowledgeable and friendly waiter opened the bottle of Lula Cellars Pinot Noir for us (acquired on a recent trip to Mendocino) while we perused the menu.

“I’m not one to normally go for fish, but at Water Grill each dish they do is wonderfully thought out in freshness, color, texture and taste,” said Catherine. “I tried the Farmed Mexican Hamachi ($33) with togarashi and wok-fried seasonal vegetables. It was seasoned with spices and had a nice tangy sauce that complemented the light kick of flavor. The seasonal vegetables included brussels sprouts which I’m always a fan of. I also loved the side dish of crispy polenta ($9), which comes covered with melted fontina and topped with a red sauce and mushrooms.”

“I loved the Atlantic cod fish & chips ($29), although the one piece of fish looked a little lonely on the plate—might have been better to cut it in half and serve two pieces,” noted Christopher. “However, the flavor was great, and the French fries were thick and perfect—some of the best I’ve had.”

After enjoying a dessert of warm almond cake with red wine poached apple and apple cider ice cream ($10), we strolled to South Cost Rep and took our seats for “Moby Dick.” Catherine had read the book several years ago, while Christopher admitted to never being able to get through it but was familiar with the story.

“My favorite author, Ray Bradbury, wrote the screenplay to ‘Moby Dick,’ and he adapted it into a Sci-Fi play called ‘Leviathan 99’ back in the 70s,” Christopher told Catherine. “I saw the play and got to meet Ray, which was a real thrill. But this is my first time seeing a true adaptation of the book.”

As in the novel, the play starts with those famous three words: “Call me Ishmael.” It sets sail from there to tell the tale of Captain Ahab and his search for the great white whale on a stage framed by what look like whale bones that double as ships masts. There are interlocking ropes and cables, flowing blue silk that mimics the ocean, and other devices that makes this experience highly theatrical and exciting to watch.

“They did a great job of making you really feel that you were in the ocean or on the boat with the use of costuming, fabric, sounds and acrobatics,” said Catherine. “I would suggest brushing up on the story before seeing the show as it may be hard to follow if you don’t.”

“I agree, knowing the story helps, but the actors did a yeoman’s job of combing acrobatic skills with considerable acting chops to make the stylized staging and Shakespearean-like story come to life,” said Christopher. “It was indeed a whale of a tale.” 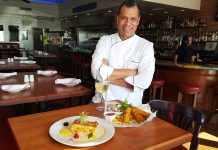