A phone poll of voters in Newport Beach that ties council candidate Ed Reno to animal testing by his employer, Allergan Inc., has sparked an angry reaction from Reno and backtracking by his opponent, Rush Hill.

Reno and Hill are vying for the 3rd District council seat being vacated by Councilman Don Webb, who cannot run again because of term limits.

“It was a ‘push’ poll,” Beek said, meaning a poll designed to sway voters rather than simply gather their opinions. It is a somewhat controversial campaign tactic that has become more common in recent election cycles, although usually in races of wider scope than a council race.

“They asked a few ordinary questions, asked about Ed Reno, then asked, ‘Would it change your opinion to know that Ed Reno works for a company that has poisoned animals here in Orange County?’”

Beek said the pollster also asked a question putting Hill in a favorable light, but didn’t remember exactly what it was.

Beek, who lives next door to Reno but has not endorsed anyone in the council race, jotted down his notes of the conversation and took it to his neighbor.

“People may disagree whether we have too big a government or whether the civic center costs too much,” he said, citing two of his campaign themes. “Come after me for that. This other stuff is a disappointing distraction.”

Hill commented via email, “We polled to determine the significant issues in Newport Beach and how the residents ranked their importance. I did not request any questioning related to my opponent’s employer.”

Neither Reno nor Hill raised the issue in a candidates night Tuesday sponsored by the Central Newport Beach Community Association at the American Legion hall on the Peninsula (see story on page 3).

Their next meeting will be at a forum Wednesday night sponsored by the West Newport Beach Community Association, to be held in the City Council Chambers beginning at 7 p.m.

They also will share the stage at the “Feet to the Fire Forum,” which will feature both Newport Beach and Costa Mesa candidates, Thursday night at 7 p.m. at the community center at 1845 Park Ave. in Costa Mesa. 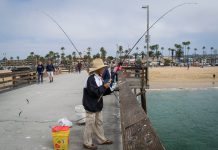